Una film review 2 Una film review Matthew Robinson
It should be possible to review a film about paedophilia without referencing Lolita. There’s a lot of uncharted psychological territory on the subject, and Nabokov’s classic novel only idiosyncratically maps a small part of it. But Una is so precious and badly-written that it inevitably recalls how funny and ecstatically-written Lolita is. It’s almost as if Una is deliberately bad in order to distance itself from its precursor.

What a shame. There’s a lot of heavyweight talent in Una – Ben Mendelsohn (The Place Beyond the Pines), Riz Ahmed (Nightcrawler), and Rooney Mara (Carol) in the title role – but maybe that’s the problem: sometimes it happens that a film overloads on thespian density and collapses into a black hole of self-seriousness. This diagnosis ignores the main problem, however, which is that Una has the most unbearably awful script of any film out this year.

The man responsible is David Harrower, who adapted his play Blackbird into a screenplay for director Benedict Andrews. Blackbird/Una focuses on the meeting between Una, a 27-year-old woman, and Ray, a 55-year-old man who had sex with Una when she was thirteen. Having served a minimal four-year sentence, Ray now goes by the name Pete and does mid-level management at a large warehouse; Una’s confrontational appearance at this warehouse, based on unclear motives, is a turbulence that threatens to collapse the new false life that Ray has constructed for himself. 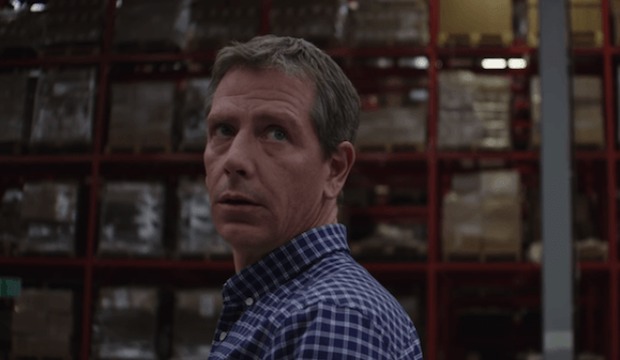 Andrews has only directed theatre before, but Una is filmed briskly, cleanly, and with assurance. The warehouse, with its white hallways, dark closets, and mazes of tall shelving, provides a moody greyscale backdrop for the supremely talented faces of Mara and Mendelsohn. These are actors that it would be a pleasure to watch sleep. Unfortunately, the film has them conscious and speaking.

They are bested by Harrower’s script, which is characterised by the cheap rhetoric of melodrama. Una and Ray monologue at each other, providing plot and theme exposition for a theatre audience by recalling the past and disagreeing about it; this requires them to close their eyes and speak haltingly as if feeling their way through the dark cave of memory. At one point (because of the randomness of people!) they laughingly trash a workstation, spilling bin bags over the floor in an empty display of abandon. It would earn them a B at A-level, for effort.

The only bits that aren’t wince-inducing are the flashbacks, little dialogue-light vignettes that illustrate Una and Ray’s illicit relationship of fifteen years before. They’re uncomfortable and clever, and demonstrate that Andrews will direct something excellent one day. All he needs to do is comprehend that there limits to what human conversation can sound like, no matter how unusual the subject.