Detroit is a harsh, uneasy thriller by one of the genre's best directors

1 CW reader is interested
Detroit film review 4 Detroit film review Hailey Wendling
All promotional material for Detroit sells the movie's biggest star as its hero. John Boyega is a strong actor and a charismatic interviewee, so it's understandable that Detroit's marketing team would want to capitalise on his presence. He strides out of posters, staring defiantly through a blizzard of four- and five-star reviews, looking every inch the righteous leader, the redeemer, the victim-turned-rebel.

That certainly isn't the role he plays. Although there are heroic elements to him, Boyega's character is far too frightened and conflicted – too real – to be the kind of protagonist he's billed as. This is consistent with the rest of Kathryn Bigelow's film. Although elements of it feel a little too thrillerish (in a way that we've already voiced concern over), make no mistake: this is a bleak film about a bleak subject.

TRY CULTURE WHISPER
Receive free tickets & insider tips to unlock the best of London — direct to your inbox
Set during the titular city's 1967 riots, Detroit is structured around one of the more gut-churning events that took place during that time: the so-called 'Algiers Hotel incident'. There's a before and after – the former shows how the riots originated with mass arrests of black Detroiters; the latter details the fallout and ensuing court-cases – but the bulk of the film consists of terrible things occurring right before our eyes, in what sometimes feels like real-time.

One night, during the chaos and bloodshed of the riots, a group of white policemen are drawn to the Algiers by gunshots. They suspect a sniper; what they actually heard is a starting pistol, fired in jest by one of the young black men staying in the hotel to avoid trouble. Officer Krauss (Will Poulter) – who has already shot an unarmed black looter in the back and gotten away with it – is first on the scene, and there's bloodshed immediately.

Krauss knows he needs to find a sniper in the hotel in order to justify his violence, so he rounds up the hotel's inhabitants (all black men, except for two white women whose presence irks the racist cops) and demands answers. There's no sniper, of course, so answers are unforthcoming. Krauss gets desperate. People get hurt. 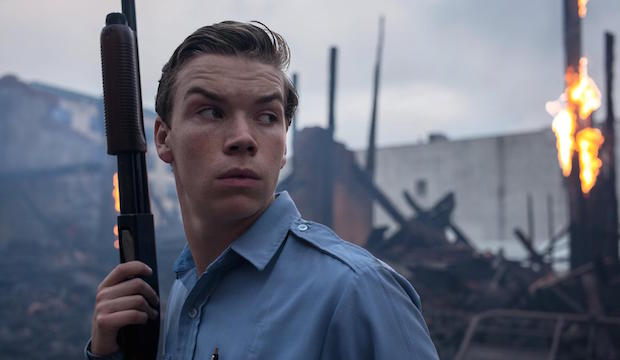 It's grimly engaging and might make for queasy viewing if Bigelow wasn't so attuned to the complicity of passive spectatorship. This is where Boyega's character comes in.

He plays Melvin Dismukes, a security guard at a nearby grocery store who gets dragged into the mess at the hotel. Dismukes fancies himself as a canny insider, a black man who can use his authoritarian status to reduce the damage that white authority figures inflict on young black men. But, at the Algiers, his method of soft mitigation comes up short in the face of Krauss' increasingly desperate hatred. It's not enough to play along with power and then quietly dust off the victims when no one's looking.

Watching Dismukes process this is one of the most wrenching things about Bigelow's wrenching movie. Repulsion, fear, and willing blindness shift around Boyega's face, neither reconciled nor cancelling each other out. There is always the temptation to look away from horror. Bigelow, to her credit, doesn't flinch.