Land of Mine has a terrible punning title, but a brilliant heart-stopping premise

Land of Mine 4 Land of Mine Matthew Robinson
Perhaps just because we don’t see many of them, WWII films from the German perspective are immediately interesting. WWII films by continental filmmakers are equally as enticing, being much less likely to succumb to the mortal sin of romanticising warfare than their US counterparts. Land of Mine, a film about the Germans, directed by a Danish filmmaker, is, therefore, a double-barrelled dose of interest.

You may be expecting a war film coated with that familiarly depressing Scandinavian tint to be, well, depressing – and you’d be spot on. But that’s fine. This is, after all, a film about German teenage boys clearing thousands upon thousands of mines from the Danish coast – and yes, some of them do go bang.

It’s 1945, the war’s finished and the Germans are sent packing from Denmark. Not all the Germans though. War is a messy business and somebody has to clean it up. Rightfully or wrongfully – this is the major moral tension of the film – a large part of this task is left to a group of teenage POWs. Under the charge of the brutal Sgt Rasmussen, these young lads are hastily trained up and sent to crawl along the shoreline digging up and defusing land mines.

And this is brutal work. Remember The Hurt Locker – a film about disposing bombs where highly specialised technicians approach them from inside a giant cocoon of armour, looking something like a cross between the Michelin man and a 19th century deep sea diver? Well, there’s none of that here; these boys have to do the job with little more than their tatty Wehrmacht uniform and a stick. When one of the lads designs a frame to lie on the sand, making the process for finding the mines easier and therefore safer, the Sergeant disregards the invention, telling the boy to put his toy away and go to bed.

Played with great nuance by Roland Møller, the Sergeant is outright the most interesting character. At first filled with hate towards the Germans, we watch as he battles with himself, struggling to find the balance between empathy and command. Those lapses into fatherly nurturing, wilful or not, provide the most hopeful content of the film, and we certainly need hope.

It’s possible to overplay brutality somewhat, and this could be a shortfall of Land of Mine. Writer/director Martin Zandvliet is rightfully unafraid to show the grim reality of the boy’s lives, but the brutality is so frequent and harsh that it becomes almost comical. When the underfed boys take it upon themselves to steal some food which later turns out to be contaminated by rat droppings, the relentless scenes of projectile vomiting are enough to send a chuckle rippling through the audience.

The slightly dodgy pun in the title, Land of Mine, sums the movie up well. It’s a very serious film but one which tells its story a little too heavy-handedly. But it is different, and the tension will keep you hooked. 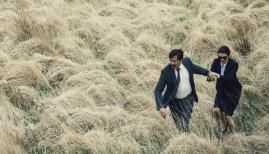