War for the Planet of the Apes film review ★★★★★

Capable of great aggression and savagery as well as kindness and humour, these most human-like of all animals can also seem the most frightening and alien; the way that these apes 'ape' us can either be hilarious or sinister. Either way, their near-humanlike quality calls the nature of being human into question. War for the Planet of the Apes capitalises on this unnerving quality to powerful, exhilarating effect.

By doing this, the latest Apes film - following both a Rise of the Planet of the Apes (2011) as well a Dawn (2014) - does more than mix intelligent philosophising with satisfying genre thrills. It sets a blueprint for how to successfully reboot a franchise (valuable, considering that we live in the age of the reboot), and even sketches a possible future for cinema itself.

War is the third chapter in the story of Caesar, the protagonist of Rise and Dawn and one of the best pixelated creations in recent memory. Caesar is (appropriately enough, given his name) a leader, a leader not just of his family unit and clan but of his entire species - because he is also a chimpanzee, or at least part chimpanzee.

Caesar was the result of animal testing, attempts to cure Alzheimer's that resulted in his hyper-intelligence. The same lab-made virus that gave Caesar a brain boost also caused a global pandemic that nearly wiped out earth's human population. By the time of War, the last remnants of mankind are pitted against a burgeoning apekind in a battle for supremacy. Caesar is no longer a young revolutionary - he is a grizzled general, skirmish-weary and jaded, hoping for peace but ready for its opposite. When Caesar's family is violently attacked by a rogue human leader known as 'the Colonel' (Woody Harrelson), he sets off on a revenge mission that pushes the definition of 'humanity' to its limits.

What's fascinating about Caesar is how, as his character arc progresses and his mind continues to evolve (he's now capable of complex English sentences), the technology used to render him onscreen also evolves. In War, Caesar is not only photorealistic but expressive in a way that transcends previous CGI characterization and - arguably - its traditional live-action counterpart. 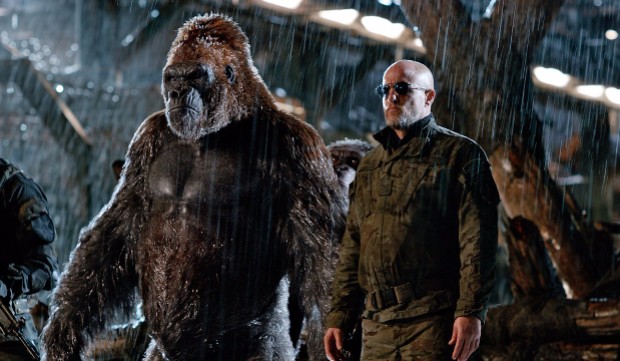 That is to say: the Caesar of War of the Planet of the Apes doesn't just convincingly translate actor Andy Serkis' performance - it appears to actually enhance it. It goes beyond merely making Serkis convincingly simian in appearance. The expensive doctoring that follows a finely-tuned motion-capture performance clearly does more than simply pasting a monkey mask over the actor's face: it allows the emotions that pass over Serkis' face to be tweaked to perfection. The effect is subliminally mesmerising, a perfect marriage the thespian and digital arts, and it's magically engaging in a way that no 'special effect' has been before.

The implications for the future of cinema are boggling, and easy to get over-excited about. It's tempting to proclaim the industry to be revolutionised, imagining a future in which all screen performances are given additional power through digital manipulation, but things might progress in that direction at all. Watching 'Andy Serkis' in War for the Planet of the Apes, though - a 'performance' that leaves his Gollum far behind him - one thing is clear. Whatever the future holds, we've taken one step closer to it.

The technological breakthrough not the only superb thing about War. The story is an expert mix of war film ('Ape-ocalypse Now' is wryly daubed on a tunnel wall), western (The Outlaw Josey Wales in particular), and post-apocalyptic action movie, each genre given a clever spin. But each spin - each upending, each inversion - is facilitated by the central presence of the apes, a presence that should be ludicrous but is actually compelling beyond anything yet put digitally onscreen.