The Big Sick, arriving in cinemas this weekend, is a romantic comedy film that manages to feel interesting and new. Fortunately, it's not the only one of its kind... 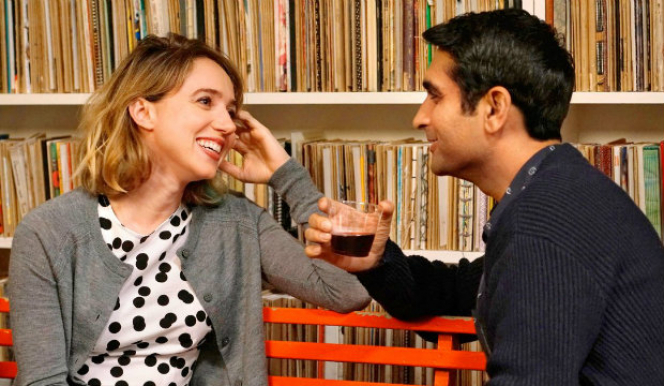 The Big Sick: best new rom-coms 2017
After you've seen The Big Sick – after you've watched this year's best rom-com and been thoroughly entertained – you'll do what you always do after seeing a film that's clever and funny and heartwarming: you'll look around for something similar. And what you'll find after watching The Big Sick is that there aren't that many films that are similar. There aren't that many great rom-coms.

TRY CULTURE WHISPER
Receive free tickets & insider tips to unlock the best of London — direct to your inbox
The dearth started in the late '00s. After Cary Grant and Katherine Hepburn, after Julia Roberts and Hugh Grant, there came the era of Katherine Heigl, Gerard Butler, Jennifer Aniston, and Vince Vaughan: people who brought about the rom-com end-times. People who are responsible for a whole generation equating 'rom-com' with 'crappy film'.

Things had to change, and they did. Stories about relationships adapted. They became fast, filthy, and frank, but most importantly they became TV shows. Many of today's best series – Girls, Fleabag, Catastrophe, Love, Master of None – are descended from the rom-com movies of yesteryear. Their wised-up attitudes to sex and love are suited to their episodic form: relationships are stories that meander and develop gradually, without a definite endpoint, rather than epic tales that conclude with a first kiss.

The Big Sick has other plans, though. Simply by being hilarious and touching, it claims back tales of sex and romance for the big screen. And it's not (entirely) alone. Below are examples of the genre's best recent efforts, and what they can tell us about how to make a great modern rom-com.

Update the battle of the sexes so that it feels real (In a World...)

Women! Ha. What are they like? And men! Golly. Don't get us started on men. Put them together and before you know it, sparks are gonna fly!

This old routine, favoured by lower-tier stand-ups and lazy 'he thinks with his crotch, she thinks with her heart' movies, should be replaced by actually interesting inter-gender conflict. For instance, see In a World..., a movie that sets its rather sweet courtship plot against the bitter politics of the voice-over industry – an industry in which a woman's voice is literally valued less than a man's.

Embrace the darkness (The Lobster)

So you might not class The Lobster as a rom-com per se. You're more likely to describe it as a satire, or an absurdist dystopian vision. and it is those things – but it is also a rom-com. It's a richly (as well as darkly) funny story about the pressure to become part of a couple, a story that develops into one about the mutual dependency and hard-won love. As with all great rom-coms, you're rooting for the two leads to end up together even as you're laughing at their misfortunes, and the stakes feel higher than ever.

Acknowledge the Manic Pixie Dreamgirl in the room (Ruby Sparks)

500 Days of Summer nodded toward the idea that maybe, just maybe, a beautiful kooky independent-spirit-type woman might not exist solely for the gratification of a sensitive man. But it was Ruby Sparks that took the 'manic pixie dreamgirl' trope to necessarily absurd lengths, revealing it to be insidious and creepy in the process. The script was written by The Big Sick's Zoe Kazan, who also stars as the titular idealised fictional creation come to life, and its awareness of rom-com tropes gives Ruby Sparks a valuable wryness.

Have fun with rom-com tradition (Man Up)

While it's important to flag up the worst rom-com staples, it's also worth keeping the better ones around in one form or another. Man Up is a great example of a movie that enlivens its tried-and-tested gambits (one character doesn't know the other's secret; the romantic dash to kiss and make up at the end) with a few twists (the secret is revealed early; the dash is comically drawn out). It's also got Lake Bell in it. Maybe the key to a great modern rom-com is the inclusion of Lake Bell?

Or just be La La Land

This is as good an option as any. Only one movie has managed to be La La Land so far, but that was a roaring success, so it's an approach we recommend.