2 CW readers are interested
My Cousin Rachel film review 4 My Cousin Rachel film review Matthew Robinson
By the time he reaches his twenties, Philip Ashley (Sam Claflin) knows what he does and doesn’t like. He likes the countryside, and his cousin Ambrose, who’s been a father to him since he was orphaned. Philip doesn’t like the city, or books, or the gossipy talk of high society.

The only thing he seems unsure about is women. It’s not that he’s in two minds about it: he’s just never really had much contact with them.

This changes when his beloved Ambrose falls ill and heads off to Italy on doctor’s orders. While managing the family’s Cornish estate alone, Philip receives letters letting him know that Ambrose has met a distant cousin in Florence, an enchanting half-Italian woman called Rachel (Rachel Weisz). Eventually the two are married, but there’s soon trouble in paradise: Ambrose sends Philip further letters, apparently written in haste, begging for help. Rachel is not what she seems.

By the time that Phillip has reached the continent, his guardian is dead and Rachel has vanished. The doctors claim that Ambrose was killed by a brain tumour, one that caused him to become aggressive and paranoid toward the end of his life, but Philip suspects foul play. He’s determined to confront Rachel and make her ‘pay’ when she unexpectedly turns up in Plymouth, but his feelings change once he meets her.

Rachel is beautiful, playful, sweet, and without the least trace of malevolence. She couldn’t possibly be responsible for Ambrose’s death. Could she? 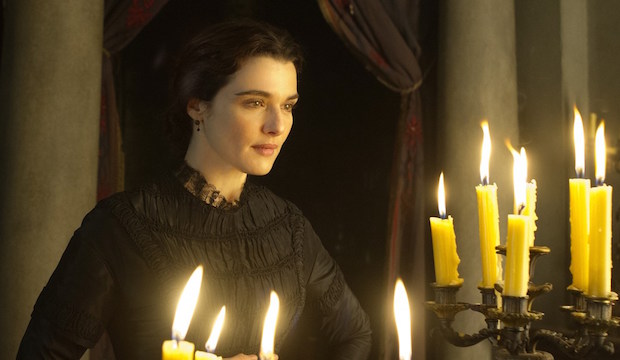 Well: could she? One of the ways that Roger Michell’s film succeeds is in being authentically ambiguous, and truly suspenseful if you’ve never encountered Daphne du Maurier’s novel (or any of its adaptations) before. It’s also authentically sexy, employing both its ambiguity and a whole load of deftly handled symbols to give a sense of deep taboo that’s unusual for a glossy period drama.

Being as suggestive as it is, Michell’s film might seem parodic if it weren’t for the cast. The performances needed to be the most ambiguous things about My Cousin Rachel – if they had been merely passable, then the whole film would collapse in a melodramatic mush of squandered tensions.

As it is, it’s hard to imagine someone being a better witchy widow than Weisz. And Claflin, despite promising a performance of endearing guilelessness in the early scenes, soon proves to be the ideal foil for his co-star. It’s the character that turns out to be guileless, ‘a glorious puppy’, but Philip is a more demanding role than he initially seems, and Claflin skilfully introduces other notes into the character as they’re needed.

Without wanting to give anything away, My Cousin Rachel is as enjoyable as recent similar films like The Beguiled and Lady Macbeth, but with a subtler and more subversive edge to its ‘dangerous 19th Century women’ story. In exploring the culturally embedded link between duplicity and femininity, it’s closer to The Handmaiden, and provides an engrossing story with implications that are just as satisfying.