Often a collaborator with a range of artists such as Andy Warhol, Kehinde Wiley and Martin Scorsese, Jackson's metamorphosing image and brand were carefully cultivated, creating a solo superstar phenomenon which surpassed Elvis. He curated a feted superpower unlike any other. But like all who rise, Jackson fell. Vilified and prosecuted in his later years, Jackson died a total enigma.

It's no surprise, then, that Jackson serves as perfect artistic fodder. Ten years on from his death, which sparked a petition to dedicate a statue in one of Rio de Janeiro’s favelas, The National Portrait Gallery’s latest exhibition, Michael Jackson: On the Wall, celebrates the man in the mirror and the art he has inspired.

The exhibition is not intended to tell the well-writ biography of Jackson, instead it's a collective reaction of almost 50 artists to his cult image, inspiration and legacy. Yet, there remains much of his inescapable memorabilia, such as his studded dinner jacket and famous white gloves, that are used in these artists’ creations. So total and mesmeric is his image and character. 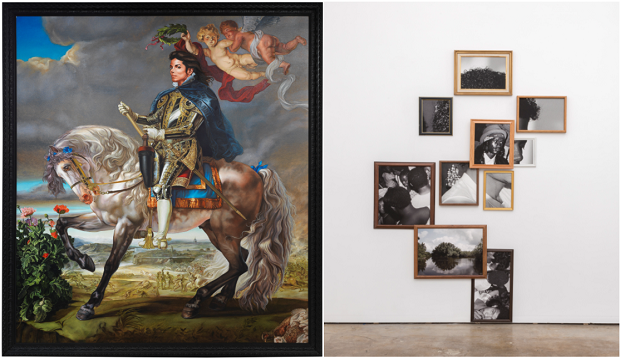 The exploration of Michael Jackson’s visual cult starts with the isolation of his final commissioned Kehinde Wiley portrait on a vibrant red wall. Mounted on a horse and donning late medieval armour, in emulation of Philip II, he is recognised as ‘The King’. The following suite of galleries explore Jackson's childhood and early stardom in the Jackson 5.

Elsewhere, the exhibition traces the impact of Jackson's identity, talent and status in the context of black America. There's also plenty of visual discussions on his outreach work on identity in Nigeria, the working-class youth of an industrially declining Midlands, and renewed struggles for liberation in Romania after the fall of Ceauşescu.

Exploring tensions of identity, Todd Gray’s photography is particularly arresting. Containing elements from the USA, Ghana, and South Africa, and concerned with the relationship of Jackson’s image and self-expression in post-colonial Africa, Gray's compositions on display are a short and welcome contrast to the bombarding colours present in Andy Warhol’s stimulating portraits in adjoining rooms. 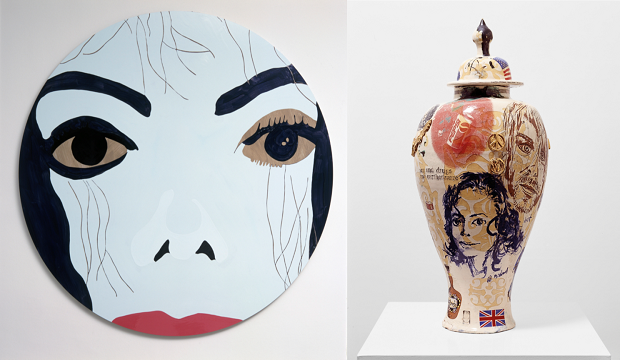 Beyond the opening galleries, there's a clear shift in mood. As you pass through a mural of the album cover for Dangerous, you move from the bright light and white space of the opening galleries into the dark heart of the exhibition. Here some of the show's most celebrated pieces, including David LaChapelle’s biblical narrative, are contrasted with works dealing with the controversial aspects of Michael Jackson’s life. Break through this darkness to enter the final suite of galleries which continue to celebrate Jackson as the total artist.

This is a well-developed and immersive show that explores the complex multi-faceted personae of Michael Jackson. There's images of the man who revolutionised pop, the man who trailblaized black power and the troubled, fragile man who fell victim to merciless consumption of mass idolatry.

With the surround sound of Thriller, Bad, and other cult classics, you'll leave as a new member of the Michael Jackson clan.

Michael Jackson: On the Wall, NPG 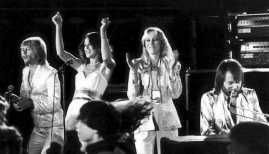 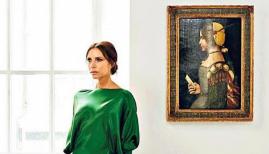