Pink Floyd return to the stage at the V&A’s latest blockbuster retrospective, 50 years after they recorded their debut single Arnold Layne

With so much hype and anticipation in the run up to the V&A’s Pink Floyd retrospective, deep disappointment might have been the only lasting feeling about it. But The Pink Floyd: Their Mortal Remains delivers on every sensory level. In a soundbite, it’s an audio-visual feast to savour.

TRY CULTURE WHISPER
Receive free tickets & insider tips to unlock the best of London — direct to your inbox
Pink Floyd are today recognised as one of the world’s most talented and visionary rock groups. They were founded in 1965 by architecture students Roger Waters and Richard Wright, along with waif-like, tousle-haired frontman Syd Barrett and drummer Nick Mason. David Gilmour joined the band as a fifth member as Barrett’s LSD-induced descent into madness began, soon replacing him altogether.

Browse our gallery of the exhibition here, and our 'essential Pink Floyd' playlist, here

The band has sold more than 250 million albums worldwide. Their best-known work, The Dark Side of the Moon, still sells some 7,000 copies a week – 44 years after its release. It’s no surprise, then, that they are now the subject of a multi-million pound retrospective.
But Their Mortal Remains is homage to the brand rather than to the band. Apart from a few personal objects dotted around the exhibition – including diaries, love letters and architectural drawings by Waters and Wright – the exhibition is devoid of biographical references. Instead, we are plunged directly into the heart of what Waters terms their ‘electric theatre’. 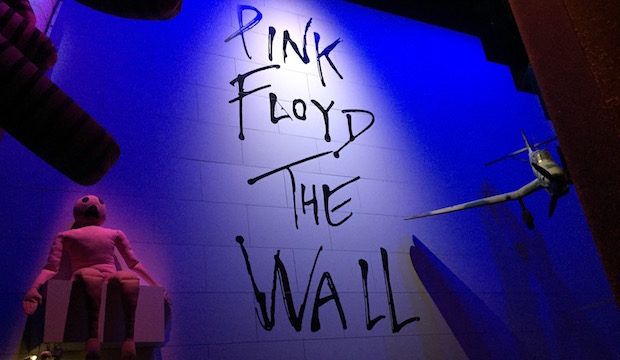 Entering the exhibition through the doors of the band’s famous old Bedford Van, visitors embark on a chronological audio-visual journey through the landmark places and defining images that have shaped Floyd’s prolific musical career.

The flow of the exhibition is driven by an exploration of each album in turn. Predictably, there is an entire room devoted to a holographic image of the infamous refracting prism designed by Floyd’s visual design team Hipgnosis. Along the way expect to see psychedelic slide projections, inflatable farm animals, six metre-high metallic heads, 3D holograms, interactive floor-to-ceiling installations, and original prints, instruments – perhaps most notably, the band's synthesisers.

Whether you’re falling down the rabbit hole in Lewis Carroll’s well-known psychedelic classic (Alice’s Adventures in Wonderland saw a resurgence in popularity in the 1960s) or gazing at large inflatable pigs flying over Battersea Power Station, the theatrical ambition and scale of the exhibition mirrors the innovation and experimentation of the band itself.

In fact, every nook and cranny of the enormous exhibition space is filled with enticing ephemera that have shaped their image. It's hard to tear your eyes away from the strip-lighted cabinets lining the pitch-black rooms crammed full of books, musical scores and literary inspirations that place Pink Floyd and their music in the context of the day. It all seems as relevant today as it did 50 years ago.

It becomes clear that every lyric, every image, every composition is laced with sophisticated contemporary cultural and socio-political messages. Each album is laden with meaning, each track a melodic commentary on the world around us.

And while the visuals stir deep, the experience is made all the richer thanks to the accompanying audio played through your state-of-the-art personal headset. After all, no exhibition on this global-rock band would be complete without a musical rendition of Wish You Were Here. 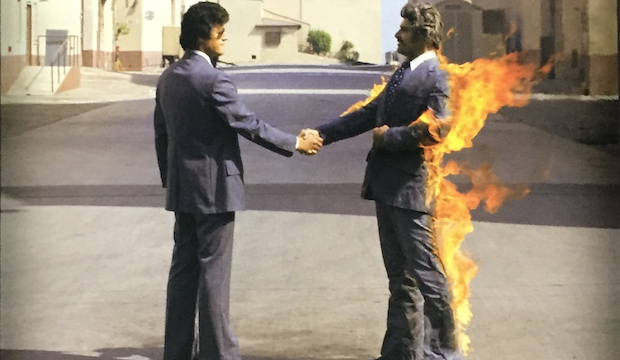 Wandering through the maze, your headset automatically synchs with the visuals in front of you. You hear music, the voices of the band in the recording studio, snapshots of recent interviews, and end up listening to a re-creation of Floyd’s last performance of Comfortably Numb at Live8 in 2005. Although a little predictable – and not quite as impressive as the dazzling, 3D gig reconstruction at the end of the Rolling Stones exhibition – the performance is uplifting, a trip down relatively recent memory lane for Floyd aficionados.

There is no doubt this exhibition is a blockbuster money-spinner. How could it not be, after the huge success of the V&A’s Bowie show in 2013 (the best selling exhibition in the museum’s history) and the supersonic knock-out Rolling Stones exhibition at the Saatchi Gallery in 2016? But cynicism aside, it’s one of the best multimedia exhibitions recently staged in London.

Bringing together never-before-seen footage and photos, design, staging, film, music technology, graphic design and photographs, the exhibition magically weaves the historical tapestry of Floyd’s rich career. It’s entertaining and engaging, and you leave with a spring in your step and a big smile on your face. What more could you want from an afternoon out? 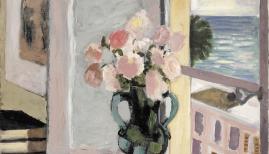