28 CW readers are interested
Cézanne Portraits exhibition review , National Portrait Gallery 5 Cézanne Portraits exhibition review , National Portrait Gallery Ella Cory-Wright
Think of Paul Cézanne and you think of landscapes, of still lives, of nude bathers. Whether it is through the rich palette of his paintings of Mt Saint-Victoire near his home in Provence, through his fruit bowls overflowing with apples and oranges, or perhaps through the second most expensive painting to ever have been sold at auction, The Card Players, we are all familiar with the painterly style of this modern master.

But the National Portrait Gallery’s latest exhibition introduces us to a different side of the French Post-Impressionist painter. Dedicated to Cézanne’s portraits – the first to do so since 1909 – this show brings forth a formidable colourist with a vision to see through surface appearances to the underlying form, structure and materiality of his subjects.

The NPG argues that Cézanne’s portraits, although less well known, serve as stylistic and autobiographical milestones in his prolific career. Composed of an array of brooding blacks and greys slathered thickly onto the canvas by palette knife, his early portraits remind us of the crude manière couillarde technique that the artist pioneered. 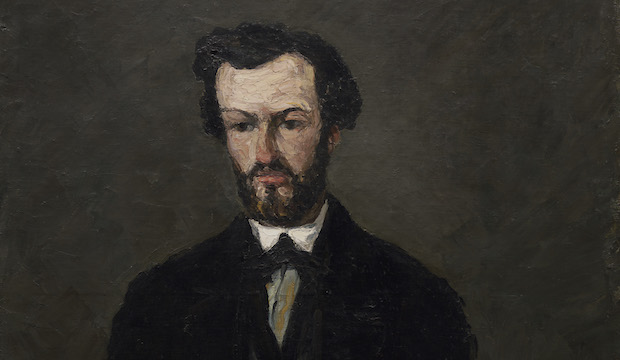 An 1866 portrait of friend, poet and critic Antony Valbrègue – incidentally Cézanne’s first official Salon painting – is exemplary of this early style. Hanging in pride of place in the the Gallery's main corridor, it commands our full attention.

The weighty palette, the sombre background and the protruding lumps and bumps of oils evoke the bullish portraits of Edouard Manet. Trouble lurks behind the sitter’s eyes. Valbrègue’s piercing gaze unsettles. The portrait possesses a violent quality that harks back to Cézanne’s earlier paintings of rape and murder. Denounced by the Salon jury and decried as having been ‘painted with a knife and a pistol’, it was rejected from the annual exhibition the year it was painted, leaving Cézane's confidence bruised and battered.

But Cézanne ignored the criticism, and went forth to create portraits more dark and sinister than before. Antony Valbrègue's neighbouring works are even more hair-raising.

All around the adjacent rooms, the palette knife continues to reign supreme as we see figures composed of thick, choppy slashes of paint. Uncle Dominique in Smock and Blue Cap, 1866-67, is the most arresting of the four portraits of the sitter. Cézanne has made the texture of his uncle's clothes pop. The folds of the jacket undulate seductively, the pleats in his blue cap are carved from layer upon layer of paint. The surface of the painting is so sensual that it protrudes from the frame – it’s as though you can almost feel the sitter's presence. But Cézanne's aggressive swagger calms with age. 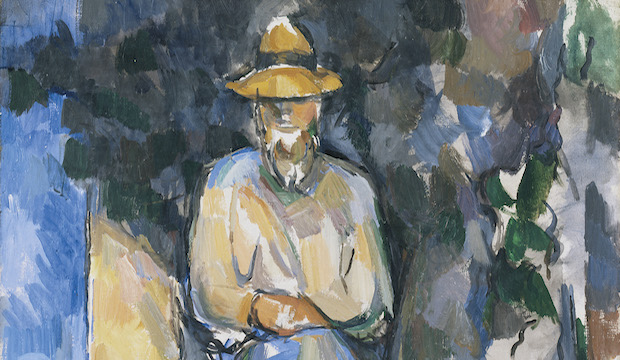 As we journey through the galleries, we journey through the years. His colours become lighter, his subject range expands and the knife gives way to the brush. He focuses on the materiality of the canvas rather than the resemblance of the sitter. He shies away from staged scenarios, movement, and emotional expressions, and focuses on painting those around him: friends, family, workmen, and his long-suffering wife Hortense.

Out of almost 200 portraits, Cézanne painted twenty-nine portraits of Hortense. They advance the systematic, serial aspect of Cézanne's work that had originated with his paintings of his uncle Dominique. Seeing three of the four portraits of Madame Cézanne in a red dress side by side is the exhibition's high note.

The subtle differences in posture, appearance and mood in these three paintings keep your eyes scanning back and forth. In all cases her face is without expression. It's as though Cézanne looks straight through her. It's not her identity that preoccupies him, but her physicality. It strikes an uncomfortable chord. 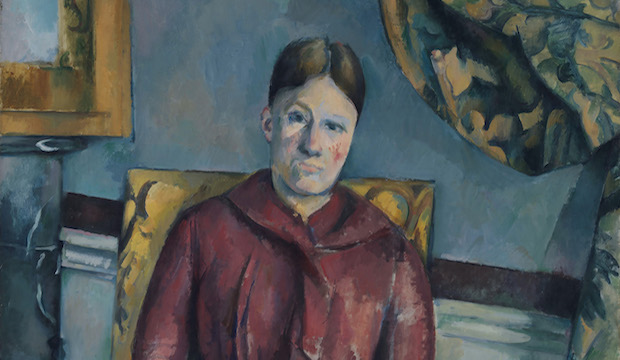 Like his landscapes, the portraits on display document Cézanne's obsession with creating complex compositions. It's all about light, texture and the relationship of one form to another. Seeing fifty of these masterful portraits hang solemnly side by side with no jazzy accoutrements, no fancy lighting or sound effects is a truly humbling experience.

Cézanne’s painterly trajectory is not only well documented, but forms part of the cannon of art history: he borrowed his bold colour palette from the Impressionists, paved the way for the Fauvists, and most famously inspired Matisse and Picasso, who affectionately declared him ‘the father of us all'.

So, thankfully the NPG doesn't present just another historical survey of his work. Instead, before us on the wall, is a less familiar but equally proficient Cézanne. And quite simply, it's ravishing to discover him. 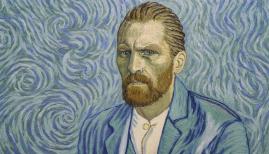