The second series of this ITV crime drama follows ex-convict and former teacher Sally (Katherine Kelly), who's released and claims she's innocent of her crime

Innocent series 2, ITV review 3 Innocent series 2, ITV review Euan Franklin
After 10 hours of the harrowing Underground Railroad and seven dense weeks of Line of Duty, this critic really needed something easy and silly and not groundbreaking to get stuck into. The latest four-day series from ITV, Innocent – the second in what’s now an anthology series, beginning in 2018 – is an enjoyable breather.

It decidedly doesn’t break new ground, preferring instead to drive happily and carefully across a familiar track of close-knit communities, recently released prisoners, gossip-worthy secrets, and an ageing male detective nursing a trauma. Innocent is a much-needed piece of short and formulated fun.

Like the first series, a prisoner is released and states in front of news cameras that they’re innocent. The ex-convict in question is the teacher Sally Wright (an always stern and gripping Katherine Kelly), who was jailed for the murder of 16-year-old student Matty. This was exacerbated by further allegations of an inappropriate student-teacher relationship between them.

Set in the Lake District, Sally stays with a mate in Keswick and vows to retrieve her former life. And it's a lovely part of the world to do so, where the vast landscapes are punctuated with rolling hills and calm waters.

But it’s a town pregnant with hidden secrets, to be found by DCI Braithwaite (a rough Shaun Dooley). Although we’re living in an age of deserved scepticism around cop dramas, the simple pleasure of watching a fiery and old-fashioned detective harshly finding the truth is still intact.

He doesn’t do anything overtly terrible, but his coercive methods during the interrogation scenes leave something to be desired. Ted Hastings would not be impressed. Braithwaite is a strangely nostalgic creation, belonging to a different time. Thankfully, despite his personal demons, he swerves the usual archetypes of addiction and drunkenness. 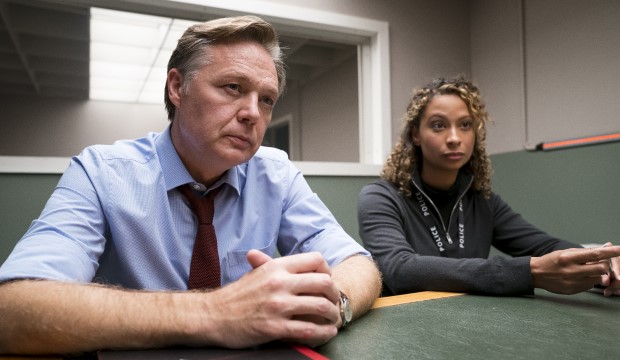 Chris Lang’s writing avoids too much predictability, despite the final twist being fairly obvious from the second episode onwards. Lang modifies clichés instead of resorting to them, but that doesn’t remove the humour and absurdity in lines like ‘I’m gonna get seriously legal on your arse’ and ‘I will destroy you’. There are also the classic red herring throwaways like ‘they will find out’, which intrigue but don't entice.

The series is largely saved by the intense frictions and prejudices between the various characters, as well as the unlikeliness of their actions. Sally, for example, goes back to her old school in the hope of getting her job back – despite the alleged affair with Matty still hanging over her. She claims that her former bosses ‘owe’ her.

The antagonistically infuriating Karen (Priyanga Burford) – Sally’s ex’s new partner – is equally absorbing in her madness. Being motivated by love, jealousy and vengeance, both Sally and Karen breathe life into a predictable story. They keep you watching Innocent all the way through and despite the murderous cloud, the series is a relaxing binge-watch.

Innocent series 2 airs on Monday 17 May at 9pm on ITV, continuing every night until Thursday.