Rosmersholm tells the tale of John Rosmer, a descendant from a long line of aristocrats who have been hailed as the moral compass of their community. Ex-pastor John and has been directly influenced by social climber Rebecca West, who arrives as a carer for John's wife. Grief pushes John towards revolutionary politics and alienation from the community as Ibsen's chimes with contemporary issues of extremism. 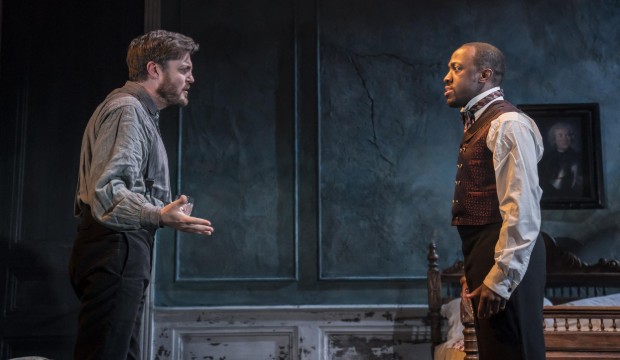 Rosmersholm is one of the least performed Ibsen’s plays, yet is considered by many to be one of his masterworks. Written in 1896, the story is radical in content. Before writing the play, Ibsen had returned briefly to his home country of Norway after being exiled in Germany. When there, he outwardly damned the Norwegian government as a ‘sham democracy’.

Inspired by this anguish and frustration, he wrote Rosmersholm as an emotional outpouring, stating: 'have been plagued by a new play which absolutely demanded to be written'. The play’s themes of cultural rage, social extremism and partisan power of the press feel so urgent it could have been written today. 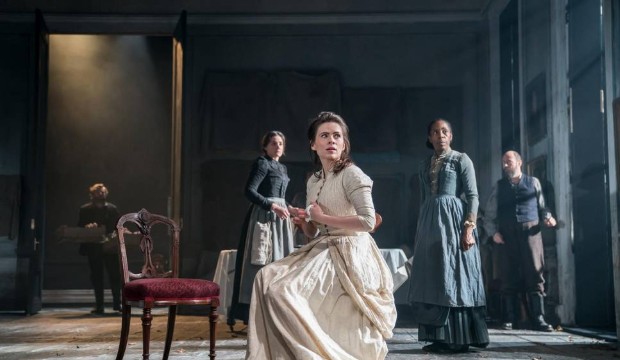 Hayley Atwell and company in Rosmersholm. Photo by Johan Persson

Ian Rickson directs with clarity and conciseness. Adaptor and playwright Duncan Macmillan is famed for his eminent adaptation of 1984 which toured the world. His adaptation of Rosmersholm is poignant, consistently funny and gives each character the time and space to air their complex, vacillating thoughts. Via Ibsen’s text, Macmillan delicately shifts the audience’s alliance from Rebecca to Rosmer and even to the morally stiff Andreas.

One of the strengths of Rosmersholm is that it is not part of the roster of historical works that parade the UK stages. Audiences and actors alike can come to the narrative fresh without a backlog of ‘national treasure’ productions as critical comparisons. This creative team can tell the story as it is meant on the page, instead of having to come up with a new angle or wacky concept to make it stand out from the rest. Rosmersholm is fresh, relevant and insightful, with skilled actors recreating the play as if it is being seen publicly for the very first time.