2 CW readers are interested
Romeo & Juliet, Shakespeare’s Globe review 4 Romeo & Juliet, Shakespeare’s Globe review Holly CW
Just weeks after Kimberley Sykes' pacy take on Romeo & Juliet opened in the leafy confines of Regent’s Park Open Air Theatre, another fresh look at the story has been wheeled onto stage at Shakespeare’s Globe – this one a socially distanced production in the hands of trailblazing director Ola Ince (Appropriate at Donmar Warehouse, Poet In Da Corner at the Royal Court). Ince’s production takes more creative licence with the text than many seen on major London stages in recent years – and in this case, is all the better for it. In marrying scenes with statistics on a broad range of social justice issues, Ince delivers a tight take on the story that’s wholly relevant to a contemporary audience.

This is a Romeo & Juliet that’s aware of itself as a drama. Initial stage directions are read aloud, and actors introduce themselves and who they’ll be playing (the starrier names to cheers from the audience), reshaping the formalities of theatre to make the experience friendly and accessible to school-age audience members. 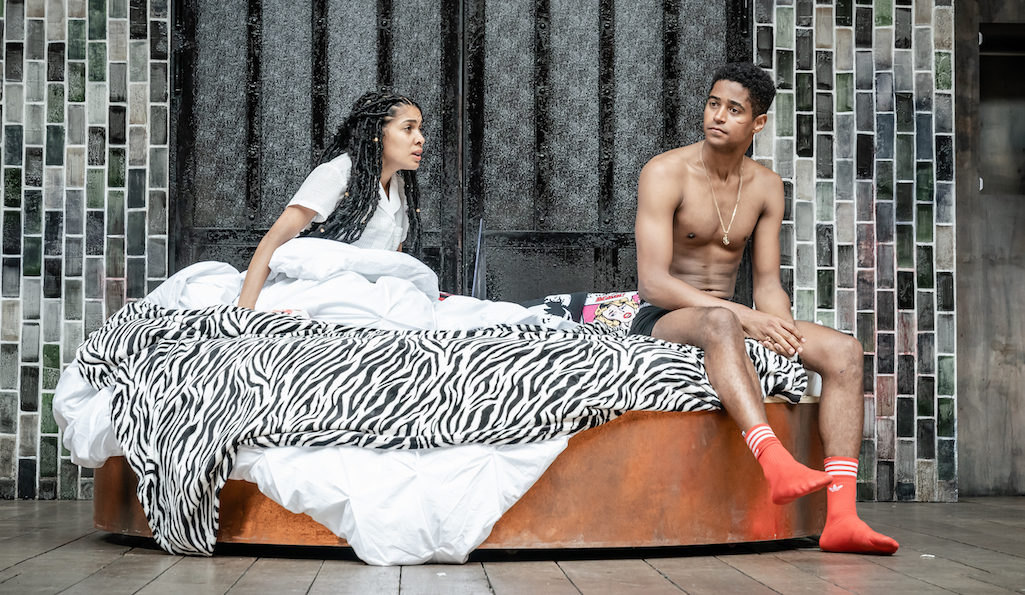 The fourth wall is quickly rebuilt and a more naturalistic narrative ensues, but with one powerful exemption: each scene comes prefaced with a correlating fact or moral message about a contemporary issue, be it suicidal thoughts (the lovers once separated), the patriarchy (Capulet and Paris colluding on Juliet’s future) or the dangers women face when walking alone (the Nurse delivering a message to Romeo while being harassed by his companions). These statements hang above the stage in a bold red font for the entire scene and are the defining trait of Ince’s clever production.

A comment that the sharp fall in the number of youth centres has left teens with nowhere to go is coupled with Romeo and his cronies circling the stage on fixie bikes, while Romeo and Juliet’s instant desperation for one another is poignantly explained by the statement: ‘Love is a matter of life or death for young people who don’t have a secure attachment to a guardian.’ 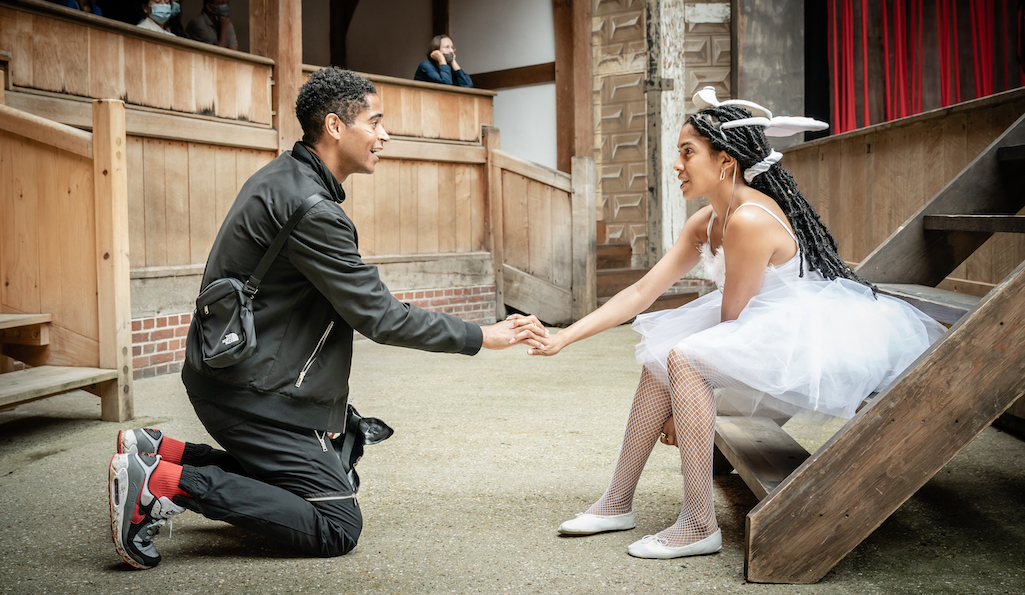 Designer Jacob Hughes presents a nimble and stylish set, with mobile props – Juliet’s bed and a greenhouse-cum-floral-tomb among them – wheeled on and off an otherwise bare stage. Using a black, white and red colour palette, he dresses the characters in contemporary street style united by touches of tartan and slogan T-shirts (Romeo’s ‘Good Vibes Only’ tee looks especially ironic as he slays Paris).

Max Perryment’s score carries the emotions and broader sentiments of the production. A four-piece brass ensemble sets the sombre tone, occasionally breaking its steady march to musicalise the story’s sudden spikes in tension and anxiety. Percussionist Calie Hough accompanies Juliet’s appearances with the eerie chime of a vibraphone. Playing a refrain reminiscent of a wind-up ballerina in a music box, this musical sequence projects a wary caution of the toxic messages tucked inside the fairytales told on repeat to young children. There’s contemporary music too; both original songs including a rap about balloons and bags of drugs at the Capulet ball (a garish, bawdy affair with identities hidden behind animal masks), and covers of pop and soul classics which get members of the audience singing.

Alfred Enoch (Harry Potter, Red) as Romeo and Rebekah Murrell (Scenes with Girls, Glass. Kill. Bluebeard. Imp.) as Juliet infuse their lines with contemporary resonance, pausing and emphasising with tact, perhaps with younger viewers in mind. The lovers here are conduits for the production’s wider comments on society’s lack of support for the young.

Murrell paints a brave and reckless Juliet. Enoch, in contrast, presents a shy and impressionable Romeo at the mercy of his life's trajectory. His death is excruciating to watch, dragged out with painful spluttering and coupled with a hard-hitting message that suicide is now the leading killer of all young people under 35. 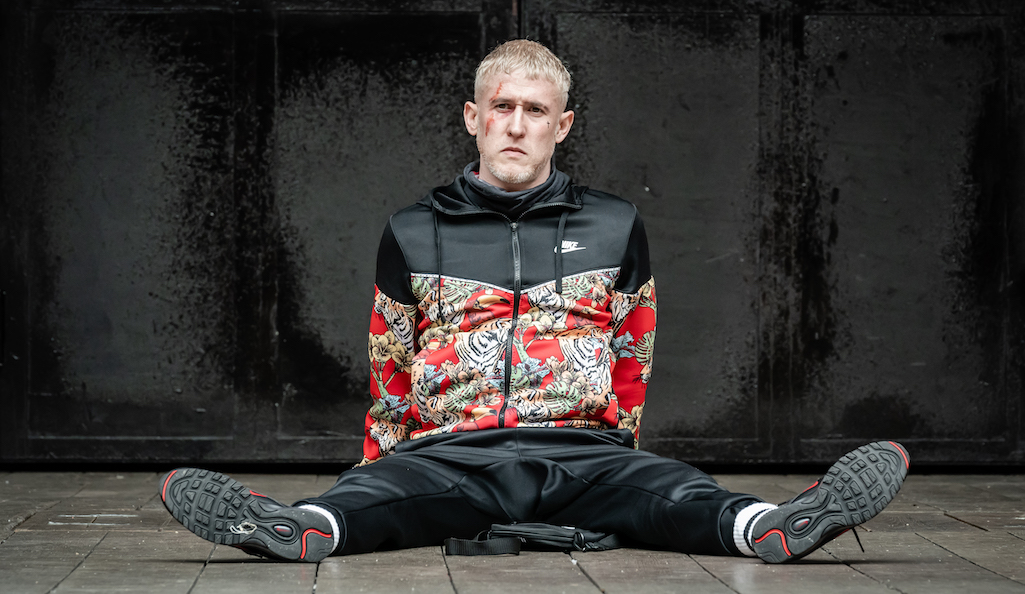 Also of note is a show-stealing performance from Adam Gillen (Killer Joe, Benidorm), as an Enigmatic Mercutio, and Zoe West (White Teeth) as Benvolio, who comes into her own delivering a solo at the Capulet party.

Ince delivers a Romeo & Juliet that speaks to a contemporary audience of all ages but especially the young. What’s more, after the sullied tenure of Emma Rice and the dreary, traditionalist season that followed, it’s encouraging to see a production devoid of technological enhancement (a nemesis of the Globe’s board of directors) that feels current and exciting. 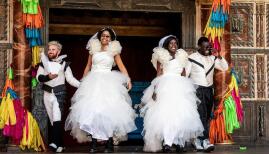