2 CW readers are interested
Glass. Kill. Bluebeard. Imp, Royal Court Theatre review 4 Glass. Kill. Bluebeard. Imp, Royal Court Theatre review James Fraser
The writing colossus that is Caryl Churchill strikes again in a series of surreal chamber pieces that illuminate life, death, gods, imps and everything in between. Her fascination with classical myth, stories and death is apparent in these fable-like tales of the absurd. Humour is pumped through the veins of each play, pointing out the hypocrisy of everyday life and the propensity to turncoat against friends and family.

The first piece, Glass, tells the fractured story of a girl made of glass, who unintentionally gets caught up in child abuse. The lines are blurred between this character existing as a decorative ornament displayed on a mantelpiece, and a fragile living, breathing teenager.

In Kill, actor Tom Mothersdale speaks as the mouthpiece of the ‘Gods’, considering the savagery of Greek mythology and the human race itself, while sitting on an inventive freestanding cloud that billows smoke.

The third play, Bluebeard, is a take on the infamous tale, but this time Bluebeard has recently died, and his highfalutin friends are reeling from the ramifications that their dearest chum was in fact a serial killer. 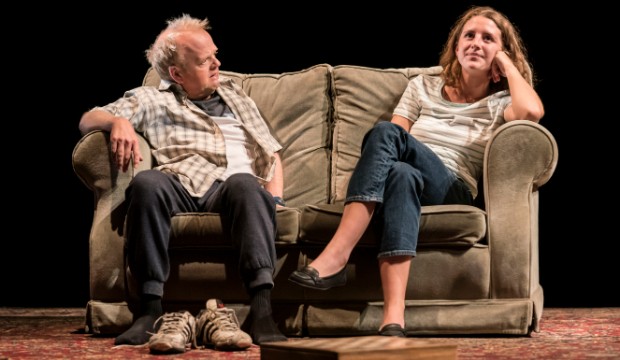 Each piece increases in length, with the final play, Imp, taking up the whole of the second half. The finale follows two rackety cousins (Toby Jones and Deborah Findlay) who argue over the existence of an Imp kept in a wine bottle who can alter the fortunes and futures of those around them.

The entire cast is excellent, including the mighty Toby Jones, but the stand-out performance comes from Deborah Findlay, who makes the Royal Court’s main house roar with laughter at almost every line she delivers with her impeccable comic timing.

Churchill’s long-time collaborator James Macdonald elegantly directs the show with a strict attention to detail. The lighting and set perfectly complement each other with exquisite, considered lighting design from Jack Knowles, and highly imaginative yet economic set design from Miriam Buether.

There is no doubt that Churchill is a titan of contemporary theatre, but this does not mean every play she releases can go without critique. There are moments of indulgence throughout the evening, particularly in Imp, which is less finely wrought than the other three, and could have been honed down for a punchier impact.

Churchill’s stylistic tool of evading full sentences is employed again, but the effect is not as potent as some of her more formally ground-breaking work like Blue Heart, which utilises the disintegration of language to significant dramatic effect.

If you prefer watching drama with concrete narrative cohesion you may want to give this abstract quartet a miss. But if you are a die-hard Churchill fan, you will delight in spending two hours in the company of these sumptuous mytho-poetic plays.