From growing up in an austere Mormon household, to getting bullied at school, to intimate lesbian awakenings, to fighting her dyslexia through the lyrics of grime music, this revealing and courageous self-penned story packs a punch with its kaleidoscope vision of music, dance and spoken word.

Stevenson describes how she was first introduced to grime music when her best friend gave her the seminal album Boy in da Corner by Dizzee Rascal. 57 minutes and 21 seconds later her life changed forever. Using the template of Dizzee Rascal’s album, Stevenson has created an unorthodox musical that wriggles and writhes to the rhythm of the grime beat, presenting her life’s story in all its undulating complexity.

Haunting, almost dreamlike moments illustrate the severity of her upbringing; we watch as her mother water-boards her son with an endless pouring of milk as punishment for swearing at the table. Blue and pink strobes flicker as Stevenson sensuously twists and turns, experiencing her first orgasm with a woman. 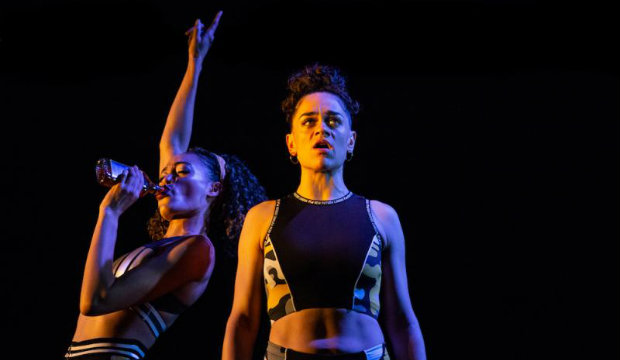 Throughout the show Stevenson spits, raps, bumps and grinds with accuracy and flair. She is truly a performer that owns her space and her words, but there is a generosity and openness to her delivery that you can’t help but be charmed by.

Political statements on religion, race, class, sexuality and cultural appropriation are laced throughout the show, plainly stated but never with outright aggression. Stevenson cares for her audience and invites us on board her rollercoaster-ride of a life. The audience is captivated from the get-go as she makes us see the world from her eyes, skilfully holding our imaginations tight to the very end.

There is charismatic ensemble support throughout from dancer Kirubel Belay who dextrously multi-roles; grime artist Jammz who plays SS Vyper, Stevenson’s confidante and grime mentor; and a stand out performance from Cassie Clare who encapsulates the very essence of a triple threat performer – her dancing lithe, her rapping crystalline and her acting uproarious.

By the end of this lyrical fusion of music and storytelling, the audience is on their feet dancing and cheering at a grime gig that has taken over the main stage of the Royal Court. With an already eclectic curation of shows, Artistic Director Vicky Featherstone has raised the bar by programming this musical extravaganza. It’s official: grime has taken over the Royal Court, and long may it reign.