9 CW readers are interested
101 Dalmatians, Regent’s Park Open Air Theatre review 4 101 Dalmatians, Regent’s Park Open Air Theatre review Lucy Brooks
Dodie Smith’s beloved children’s story about 101 spotted pups and their fashionista captor is adapted again, this time into an all-new musical by writer-director Zinnie Harris, with an updated book by Johnny McKnight, and music and lyrics by Douglas Hodge. The middle instalment of Regent’s Park Open Air Theatre’s 90th anniversary season – and the first new musical the theatre, known for its revivals, has produced since 1983’s Bashville – it’s silly and adorable in a way that will enrapture a school-aged audience, but there’s plenty of quips and asides to keep an older audience, paying for the outing, amused.

This reviewer’s expectations were initially dimmed on seeing set designer Colin Richmond’s commercial, garish block lettering announcing the show's name taking up a hefty chunk of the stage. While these obstacles remained in sight and in the way for the entire show, either pushed to the side or spun around by a hard-working ensemble dressed in monochrome to reveal stand-alone but not-entirely-necessary set pieces, they became easy to ignore, eventually. 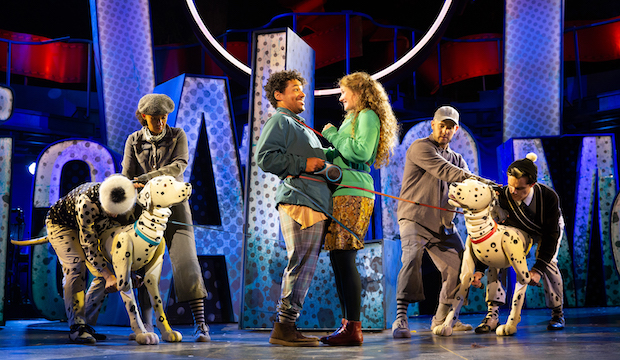 Adding depth and soul to the design are puppet maestro Toby Olié’s (slightly yellowed?) Dalmatian parents, Pongo and Perdi. Both are two-man jobs, with straight-up puppeteers controlling their heads and working animalisms into their movements while, in reverse centaur style, their hind legs and verbal personalities are delivered by actors Danny Collins and Emma Lucia respectively. Lucia is especially good as Perdi and one of the production’s strongest singers; her lead number All of our Kisses is an emotional highlight of the show.

It would have been an impossible task to animate even all 15 of the first litter of puppies, but working with Olié, director Timothy Sheader gets around this neatly by having the ensemble thrust puppy heads into the furnishings, with the odd wagging tail thrown in for good measure. The escaped puppies become fleshed-out characters in the second half, performed by four adorable children, and just you wait for the final scene, where a treat for all dog lovers is in store. 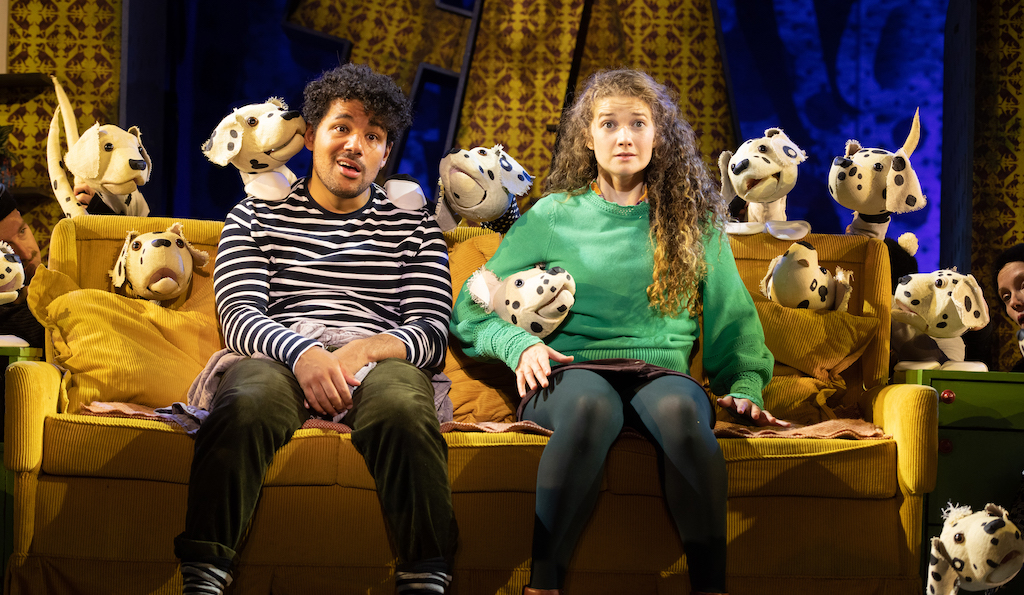 Hodge’s songbook leans heavily towards quick and witty numbers laced with turbo tongue twisters, and Litterbugs sung by Dominic (played as the soft boy trope by Eric Stroud) and Danielle (a highly strung but caring Karen Fishwick) is a particular delight, despite an obvious lack of chemistry between the quirky, bookish couple.

Cruella’s dopey sidekicks Casper (Jonny Weldon) and Jasper (George Bukhari), dressed in street style with trendy throw-back hairdos by costume designer Katrina Lindsay, do justice to sparky number Two Bad Criminals, which will make those who know their Disney chuckle with its references to a ream of the franchise’s memorable villains. 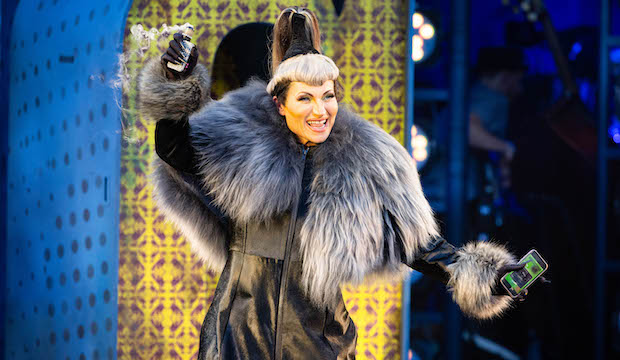 This is Kate Fleetwood’s show as a gaudy, manic and wickedly funny Cruella de Vil for the social media generation. She’s a stellar singer, commandeering the stage while puffing on a vape and cackling that her influencer status makes her more powerful than a politician. She initially wants the spotted canines for a photoshoot, but after a video goes viral of her hitting one of the pups, she’s ready to take their coats in revenge.

It can sometimes feel like there’s too much on stage in Sheader’s production, and the climactic fight scene between Cruella and the puppies feels clumsily choreographed. These directorial wobbles aside, 101 Dalmatians is easily one of the best new shows to take your kids to this summer, and its adult gags and nostalgic plot should win you over too.