A world premiere from play writing royalty Tom Stoppard: Leopoldstadt follows the highs and lows of a Jewish family in the first half of the 20th century

While Leopoldstadt is epic and emotionally powerful enough to feel like a fitting final work, the story of a Jewish family from 1899 to the 1950s is also a departure from Stoppard’s usual style. Yes, there are references to mathematical theories and high-brow culture, but this is a play powered by intimacy, devotion and suffering. Instead of playful wit and wordplay the drama is punctuated by hauntingly human enactments of historical atrocities. It’s a history that has particular resonance for Stoppard, as a Czech Jew who escaped to England and later learned how his remaining relatives were killed at Auschwitz.

We begin in Vienna in 1899, on a stately stage as the Merz family decorate a Christmas tree while idly discussing what it is to be Jewish. A generation after getting full civil rights from Emperor Franz Josef, Austrian Jews are affluent, educated and at the core of arts and culture. This is a family of thinkers and creatives, spreading over three generations, brought to life by a cast of 20 actors – including Stoppard's son Ed as mathematician Ludwig Merz.

Judaism is just a small part of the Merzes' identity. ‘We’re Austrians,’ Hermann Merz (a brilliant Adrian Scarborough) declares, talking with relish and pride about living in a 'city of art-lovers and intellectuals’. But the stigma of anti-semitism still seeps into daily life, whether it’s being overlooked for a professorship or prohibited from joining the jockey club. 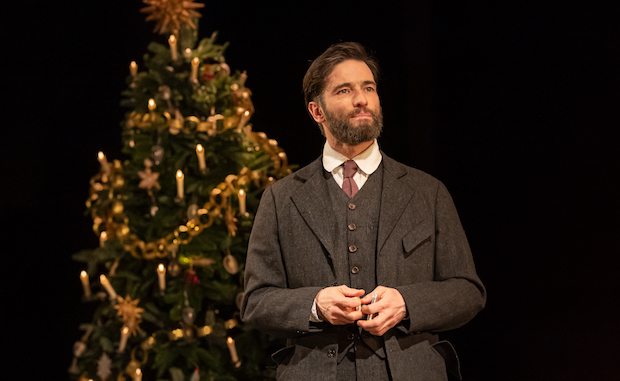 The dialogue can veer towards debate or lecture, as family members earnestly converse about what it is to be Jewish in rather abstract terms. But in the more personal moments, Stoppard’s script radiates tenderness without falling into sentimentality.

As the story shifts forward in time and the children from previous scenes become adults with their own offspring it can be occasionally hard to keep track of who’s who (helpfully, the programme has a Merz family tree). As such, some characters feel more developed than others. It’s the plight of Hermann Merz, his loving but fickle wife and their only son that cuts the deepest.

The rise of Nazism has a sickening, deadening inevitability: every single audience member knows where this is heading. But it’s the final scene, where the three surviving members of the Merz family reconvene in the 50s, that makes this story of anti-semitism feel so chillingly pertinent in 2020.

There’s the rich Manhattanite who secured American visas for her family the day they were transported to death camps. There’s the young man who survived Auschwitz but watched his whole family perish. And there’s the chipper Englishman, who barely remembers leaving Austria as an eight-year-old and talks with heartfelt pride about being part of an open, inclusive and liberal Britain.

This is a play that forces us to confront our own complacency and contend with the fragility and threats to such values, by showing how prejudice and hate can build and breed over one generation.