Federíco García Lorca’s 1932 tragedy is relocated from Andalucia to rural Ireland. The translation keeps poetry at the forefront, maintaining the threads of Catholicism, tribalism and gypsy roots that run through Lorca’s original. Last time the Young Vic staged a Lorca tragedy, with Yerma in 2016, it stung with contemporary relevance as infertility became a struggle with ‘leaving it too late’ and IVF.

But this production could not be more different. It emphasises otherness: Lorca’s text presented in its full fatalistic strangeness, with the presence of the Weaver (Bríd Brennan) portending death, the two Woodcutters (Faaiz Mbelizi and Roger Jean Nsengiyumva) stalking the stage and the Moon (Thalissa Teixeira) promising romance in heart-wrenching song. The result is passionate and striking, but increasingly overwrought and occasionally even silly as the story reaches its devastating conclusion.

Susan Hilferty’s atmospheric in-the-round staging evades realism, inviting audiences into a strange dislocated space that shifts between the mountain and the fields. And Isobel Waller-Bridge’s soundscape slips between ethereal beauty and eerie morbidity.

We begin with the bitter comedy of two families sizing each other up for marriage. The matriarch, played with a glint of steel by the superb Olwen Fouéré, is preparing for the wedding of her only surviving son (David Walmsley). But she’s still consumed by bitterness about the murder of her husband and eldest son at the hands of the Felix family, and suspicious of her prospective daughter-in-law. 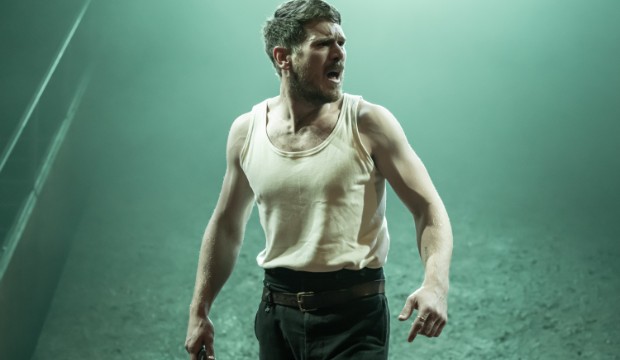 The bride to be (Aoife Duffin) has her own connection to the Felix family: brooding Leonardo Felix (in a powerful, frequently shirtless, performance from Gavin Drea) is known to gallop his stallion up the mountain to her bedside. But her father wants money and land so negotiates a match.

As the wedding arrives, language is thick with curses, violence and a mounting sense of inevitable destruction. What starts as effective becomes more monotonous as the melodrama mounts and the pace begins to drag. And sly uses of aerial suspension and raised platforms become less effective with each use. As the emotional intensity mounts, it also becomes increasingly abstract and inhuman.

The most interesting aspect of the production is the portrayal of passionate love – or the lack thereof. Instead of any burning romance, the lovers’ moonlit escape is presented in a colder, darker light. The bride’s sustained surliness shows her desperation to swerve not just the arranged marriage, but the whole life that comes with it. Her desires are spiritual not bodily: she wants the freedom of the sea and the open sky. And her lover, who only really wanted her when he couldn’t have her, is more turned on by the effect his seduction will have on the rival family.

Blood lust, it seems, is stronger than actual lust. And as all the elevated language and spiritual symbols culminate in an earthy, bloody battle, it's a sobering reminder that violence triumphs, and re-charges with each generation.