Daniel Radcliffe and Joshua McGuire are our new favourite double act in this playful revival of Tom Stoppard's Rosencrantz and Guildenstern are Dead, now extended until 6 May 2017

Daniel Radcliffe and Joshua McGuire play the titular twosome with chemistry and comic clout. They spark as a double act, magnifying each other’s foibles like Laurel and Hardy, Morecambe and Wise, French and Saunders et al. (Seriously, these two should replace Mel and Sue on Great British Bake Off).

As the two courtiers of Elsinore, ‘excellent good friends’ of Hamlet, Radcliffe and McGuire riff off each other, perpetually bewildered, ricocheting between dislocation and insight while wringing out all the wit of Stoppard’s script.

And this is a play saturated with wit. It was Rosencrantz and Guildenstern that made up-and-coming young playwright Tom Stoppard into the household name – the Shakespeare of our generation, some said.

The plot is basically Hamlet fan fic. Stoppard took a well-known story and created a new masterpiece, told from a different perspective, shaped but not confined by the original plot. He then took it to Beckettian plains of absurdism.

Taking its title from a line in Hamlet, Rosencrantz and Guildenstern are Dead is a textually reflective inverse of Shakespeare's tragedy. Two minor characters, courtiers Rosencrantz and Guildenstern, take the spotlight, while Hamlet, Gertrude and Co are inconsequential bit parts. The travelling players are a motley band of clowns with a coarse, lank-haired libertine of a leader, played with panache by David Haig.

For all the fine performances, it’s language that dominates the show. If other writers engage in wordplay, Stoppard has his characters sparring with language, sucking the creative promise from every word. This production displays all that erudition with lively levity. The result is both hilariously silly and savagely intelligent.

Tickets for the extended run go on sale 27 March at noon. 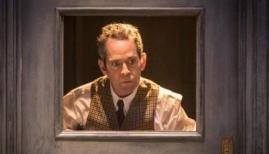