It's standard to see Shakespeare on stage, but usually we see one of his plays and not the bard himself. Peep Show actor and comedian David Mitchell makes his West End debut playing the part of William Shakespeare in Upstart Crow. Originally a BBC series penned by Blackadder writer Ben Elton in 2016, it brings lively Elizabethan comedy to the stage.

Mitchell plays as Will, the disaffected intellectual colossus William Shakespeare, who is being harassed by the blood-and-thunder actor Burbage (Steve Speirs) to write his latest masterpiece in order to keep favour with the recentlys crowned King James I. This loose narrative provides a platform for two hours of updated Elizabethan word play, beefed up with writer Elton’s trademark witticisms, all gently poking fun at wokeness, race and gender.

With some nimbleness, Elton weaves together the plots of Shakespeare’s most famous works including King Lear, Romeo and Juliet, Othello, and Twelfth Night, with hints of The Tempest, and Antony and Cleopatra thrown in for good measure. These references are gratifying in and of themselves, especially if you are a Shakespeare fanatic, but as story threads they do not hang together to create a plot of any great substance. 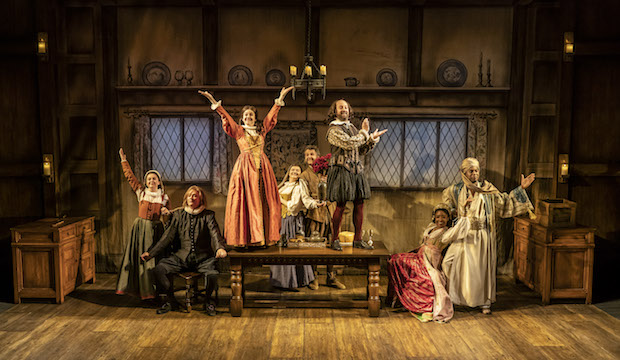 The play is about the performances, not the plot. A dynamic cast has been curated, with some of Britain’s best-loved comedy actors treading the Bard’s boards. There’s outlandish buffoonery from comedy treasure Mark Heap as the puritanical Dr John Hall. Rob Rouse plays the straight man as Will’s down-to-earth servant Bottom. Games of Thrones Gemma Whelan plays Kate, a savvy and ahead of the curve Londoner, who dreams of becoming a thespian at a time when actresses were outlawed. Rachel Summer and Jason Callender play a pair of Egyptian twins, loosely mirroring the plot of Twelfth Night. Much cross-dressing ensues.

There is slapstick comedy throughout, paced with verve from director Sean Foley who has become a whiz at directing West End comedy productions like The Ladykillers and Jeeves and Wooster in Perfect Nonsense. A comic highlight is when the masochistic Dr Hall takes a ‘Malvolio’ turn when trying to woo the unimpressed Kate with an increasingly large, luridly designed codpiece and trousers.

Although Elton states in the programme the play is ‘an entirely original excursion not a TV adaptation’ there is clearly a copy and paste job going on here. That being said, if you want to see the live theatrics of your favourite gags from the TV series, then a treasure trove awaits you. The evening’s entertainment is accessible and light enough that if you’ve never seen the TV show, you won’t feel lost in Elton’s creation of the Bard’s chaotic, whimsical world.

Tickets for Upstart Crow at Gielgud Theatre are on sale now. Click here to book.