Mischief Theatre, award-winning purveyors of sell-out slapstick hilarity, takes us back to school with Groan Ups

With two smash-hit shows still running – The Play That Goes Wrong at the Duchess Theatre and The Comedy about a Bank Robbery at the Criterion Theatre – there’s no denying the popularity and pulling power of this theatre troupe.

The brainchild of a group of students from London Academy of Music and Dramatic Art (Lamda), Mischief Theatre has conquered Broadway and the West End with a distinctive brand of devised, increasingly ridiculous comedy.

Groan Ups, written by the central trio of artistic director Henry Lewis, company director Jonathan Sayer and Henry Shields, takes us back to a primary school in the 90s.

A stage full of artwork, educational posters and vastly oversized furniture suitably dwarfs the cast and makes the audience misty-eyed with nostalgia. 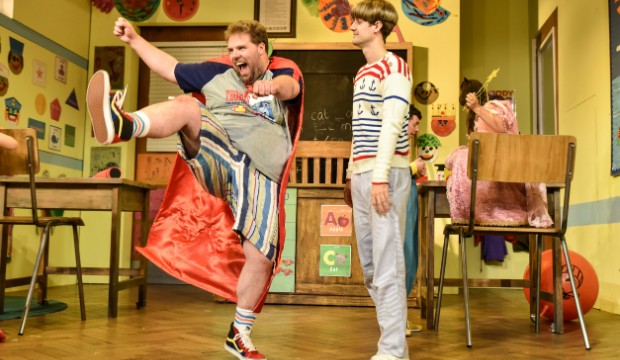 Dressed in an array of capes and dungarees, five adult actors play Year 2 Yellow Group, who have been in a classroom while their teacher manages a glue spillage incident. Clever Katie (Charlie Russell) and precocious Archie (Henry Shields) immediately vie for power, establishing a vote over who should be the leader. Class clown Spencer (Henry Lewis) is more interested in wreaking havoc, while Daddy’s Little Princess, Moon (Nancy Zamit) flits between prancing and body-trembling tantrums. And outsider Simon (Jonathan Sayer) soon becomes the scapegoat for the whole group's misdeeds.

Copious comedy comes from capturing the childish combination of naivety (‘I’m going to be Prime Sinister’) and truthfulness (particularly in a hilarious account of a daddy getting amorous with the cleaning lady).

Just as the cutesiness of adults playing six-year-olds starts to grate, we skip forward. The same five kids are now awkward 14-year-olds, climbing through the window of their old primary-school classroom to drink lurid blue alcopops and play Truth or Dare. And the same friendship dynamics are more fraught thanks to the addition of hormones. 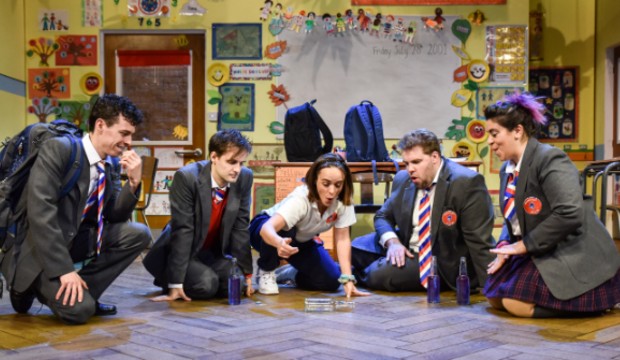 Finally we see the crew as 30-somethings returning for a school reunion, lurking in the classroom to dodge the festivities. Having lost touch and gone their separate ways, the tensions that seemed so innocuous as children have taken root and dominated their adult lives.

The laughter still comes thick and fast, but adulthood sharpens each character’s insecurities and dissatisfaction. As these repressed issues come to a head, Groan Ups develops from silly comedy to a thought-provoking study of identity, shared history and friendship. However, all the seriousness is eventually dissipated with a giant lobster… obviously.