Compared to these epic yarns, Prebble's 2012 hit The Effect was quieter, smaller and more intimate. But the story of two people falling in love during a clinical trial still poses big questions on mental health and medicine. It scored good reviews and a Critics' Circle Award for Best New Play when it opened at the National Theatre, then went on to impress on Broadway.

Now director Anthony Neilson (Unreachable, Royal Court) leads the first London revival of The Effect at Soho's new Boulevard Theatre.
The show transports audiences to a slick medical centre, where volunteers participate in clinical drugs trials. Connie and Tristan come to try out a new anti-depressant but also find romance. But are the racing hearts and rushes of euphoria the highs of falling in love, or the side effects of the drug? Either way the clinicians are losing control of this experiment.

Scientific development comes up against human impulse in a searing story about love and mental health. 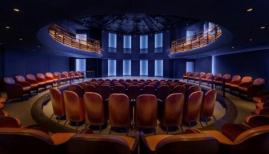