Brilliantly alive with its own conception: A devised piece from experimental writer and director Anthony Nielson, starring Dr Who's Matt Smith

Matt Smith (of Dr Who fame) plays director Maxim, a hypochondriac orphan who despairs at being left in the dark about his family’s medical history.

Maxim’s obsessive, maddening quest for the perfect, ‘unreachable’ light in which to shoot his film resonates with the creation process behind Unreachable, a devised piece which Nielson workshopped into being in the rehearsal process.

The play begins by poking fun at the audience’s suspension of disbelief, whisking it away and exposing the artifice of acting, with an audition in which the actor flips comically in and out of charged emotion, and is punctuated by the sullen, disembodied voice of the director.

And so it continues, riffing on the process of creation: props are labelled with their function and Chloe Lamford’s set is rearranged to create the next scene around a character still delivering his lines from the last. 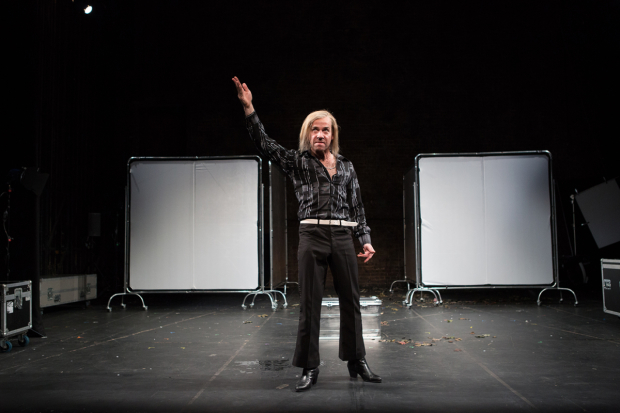 Jonjo O'Neill as Ivan aka The Brute in Unreachable

The actors had only had two days on the script used at press night, and no doubt it will change again. Littered with coincidences that chime with the real world, it begs the question of what of the action is planned and what is improvised in response to unforeseen events: the film they are making, Child of Ashes is, we suspect, inspired by one of the biggest box office bombs of all time, Heaven’s Gate, said to have been wrought to destruction by its director Michael Cimino, who died on the second day of Unreachable’s run; a real moth flutters on stage, becoming part of the action, and later becomes a central motif.

Oddly tinged with farce and an element of slapstick, one wonders if this is the actors falling back on their crowd pleasing abilities in the absence of substance elsewhere. But there is no denying that this production is vastly entertaining, and some of the lines outrageously sharp, particularly from Jonjo O’Neill as Ivan, aka The Brute, who whips the audience into a hysteria and threatens to overpower the production with his deliciously over-the-top homage to Klaus Kinski.

It’s rough and ready, with no doubt some ad-libbing, and even some corpsing, but so thoroughly enjoyable that it doesn't matter hugely: this is a play brilliantly alive with its own conception.