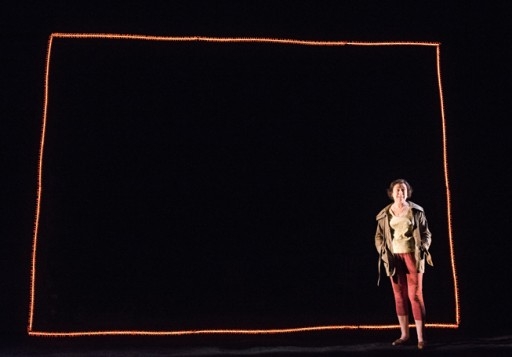 It’s an utterly banal scenario, rarely seen on the stage, made vibrant with ripples of knowing humour. But the conversation between Sally (Deborah Findlay), Vi (June Watson), Lena (Kika Markham) and Mrs J (Linda Bassett) is just one of the dramatic worlds.

The chitchat stops and the garden disappears. A black stage is framed by flickering strobe. Mrs J stands alone, telling us, with sardonic acceptance, of a post-apocalyptic world. The ridiculous and the horrific entwine. We laugh: ‘Commuters watched breakfast on their iplayer on the way to work’; then gasp ‘Finally the starving stormed the TV centres and were slaughtered’.

The scene shifts back seamlessly; the sudden sunshine of the garden leaves you blinking, temporarily blinded by the light. Before you’re lulled once more into the familiarity of the fenced patio, it flashes back to the black alternative world, then back and forth again.

The form is gleefully self-reflexive. Language leaks into the structure and seemingly inconsequential remarks shimmer with significance. In reference to different TV plots, Sally talks of ‘universes to get your mind around’, encapsulating the parallel play worlds.

But it’s not just this strobe-framed future world that unsettles the domesticity. Each woman has her own private catastrophe, just as apocalyptic personally as the interludes of global devastation. Four urgent, rhythmic inner monologues create windows into hidden worlds of panic, regret, hopelessness and rage.

As all Churchill plays, Escaped Alone is intensely clever, but it’s a testament to the wit, performances and James Macdonald’s production, that there’s nothing alienating about the ideas.

It pushes you to the edge of your comfort zone, but entertains too — and leaves you reeling. All this is packed into just 55 minutes.