Les Blancs, Lorraine Hansberry's searing play about racial tension and revolution in an African country is revived with clout

The Africa on the Olivier stage is an atmospheric fug of grey dust and pungent smoke that spreads through the theatre. Women in traditional dress talk in local dialect, play drums and chant on the edge of a vast revolving stage. The wooden skeleton of a Christian Mission rotates at the centre.

American journalist Charlie Morris (Elliot Cowan) arrives, camera and notebook in tow, to find distinct racial tension and an undercurrent of political unrest. Natives boycott the Mission unless in need of medical attention. The reverend, its fabled founder, is absent. A red-faced Major reports of natives attacking white settlers. Revolutionaries are killing colonists in the fight for independent rule.

When two brothers return home to mourn their father, they struggle to reconcile their newfound ideals with the turmoil rising in their home country. Abioseh (Gary Beadle) believes Christianity is the answer. Tshembe, in a bravura performance by Danny Sapani, is torn. He desperately wants independence for Africa and recognises brutality as both necessary and futile. But mostly he wants to return to Europe to his white wife and baby son. 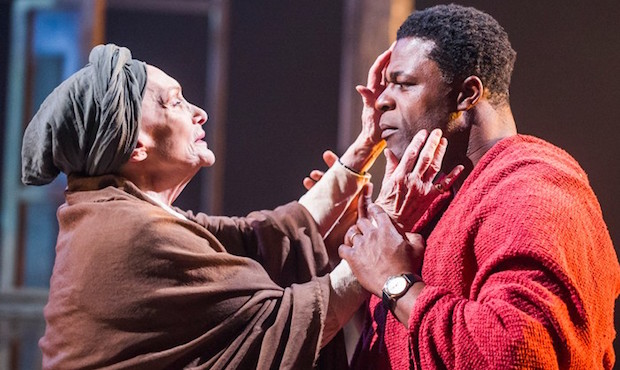 Rousingly resolute, yet shot through with ambivalence, the play is a cacophony of voices tracing the roots and repercussions of colonial repression from an intimate personal level to mass genocide.

Playwright Lorraine Hansberry illuminates the complexity of the moral and intellectual debate with insightful, eloquent lines, that jump out and stick in your mind: ‘what we know is what we accept – it is like that everywhere’; ‘a fire has been lit in Africa… but a fire can spread in many directions’. This National Theatre production is the first major London revival of the play since its 1970 Broadway premiere, and it's a testament to the strength and depth of Hansberry's writing that her portrayal of racial tension and civil conflict still feels searingly pertinent.

But, though the depth and nuance of male experience still feels fresh, the women’s voices are limited. The content, unquestioning doctor and the wise Madame who turns a blind eye (literally and figuratively) are weak compared to the potent, forceful male voices.

The production doesn’t challenge this. And there’s something predictable and outdated about the metaphor of Africa as a lithe, leggy and barely clothed women in wordless toil.

Nonetheless the masculinity is a force to behold and as the moral debate mounts to violence, Les Blancs is a dense, intense watch. But it’s also quite the spectacle and director Yaël Farber delivers the moral message with vivid immediacy.