16 years after Joe Penhall's biting state-of-the-nation assessment of race, power and the NHS first premiered, this Young Vic revival shows the distinction is just as contested and corrupt.

Christopher (Daniel Kaluuya) is a young black man admitted to a psychiatric hospital. After a month of treatment and observation, newly qualified registrar Bruce (Luke Norris) thinks his patient’s diagnosis of borderline neurotic and psychotic is just the tip of the iceberg.

But senior consultant and department supervisor Dr Smith (David Haig) has other ideas. And he is determined to use his erudition, experience and clout to stop Christopher taking up unnecessary space on the ward.

Playwright Penhall cuts to the core of issues that still dominate debate and it's the kind of deep-rooted, stifling stuff that Liberal fears are made of. 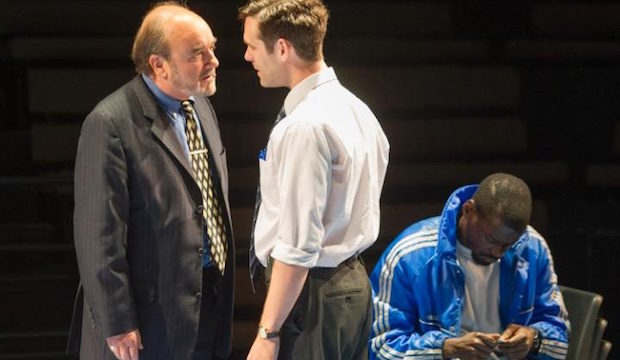 David Haig, Luke Norris and Daniel Kaluuya in Blue/Orange at the Young Vic

The diagnostic process becomes a moral conflict and power struggle. Is it irresponsible to release a man who’s convinced that oranges are blue and zombies are lurking outside his council flat? Or is it a ‘drain on resources’ to detain him on the ward?

The consultant explains Christopher’s erratic and disturbing behavior as normal ‘where he comes from’ – despite repeated reminders from the junior doctor that Christopher, in fact, comes from Shepherds Bush.

The first hour is bracingly funny. But over two-and-a-half hours as the argument rages the three-hander grows exhaustingly intense; the patient’s welfare becomes a mere sideshow or deliberate pawn in a system shaped by prejudice and abuse of power.

Matthew Xia’s production emphasises the relentless force of The Establishment, with constant, fast-paced speech. After entering the theatre via a blue consultation room littered with orange peel, the audience stare at an identical space, and Christopher spends much of the time pacing around in the shadowy periphery while the doctors on stage argue over his mental state and fate.

Watching all three men reach the freighted limits of mental wellness is disquieting in a whole swathe of ways. But what’s most disturbing about Penhall’s perniciously smart story of race and welfare is how it hasn’t dated at all.