Playwright Jack Thorne and director John Tiffany return to the Royal Court with a new play, The End of History..., capturing the comedy and tension of family life

5 CW readers are interested
The End of History..., Royal Court Theatre review 3 The End of History..., Royal Court Theatre review Lily Spicer
Playwright Jack Thorne and director John Tiffany, who worked together on the Olivier and Tony Award-winning play Harry Potter and The Cursed Child, as well as Royal Court productions Hope and Let the Right One In, collaborate again. This time, they’ve done away with fictitious wizards, Scandi vampires and Labour councils facing cuts, turning their attention instead to dramatising a subject far closer to home: Thorne’s family life. Called The End of History… the play, which Thorne describes as a love letter to his parents, is exactly that. But with its date-stamped political references and inward-looking subject matter, it offers little by way of a wider point, and is likely to become less and less relevant with time.

Set entirely in the kitchen of the focal family’s Newbury home – a space designed by Grace Smart as a lofty, homely, lived-in room – The End of History… first transports us back to an evening in 1997. Left wing, quasi-intellectuals Sal and David are preparing dinner for their three children, each named after a socialist hero. Eldest son Carl is bringing his posh girlfriend Harriet home for the first time. Middle child Polly is travelling back from Cambridge University where she’s studying, and youngest brother Tom is due back from detention in time for dinner. 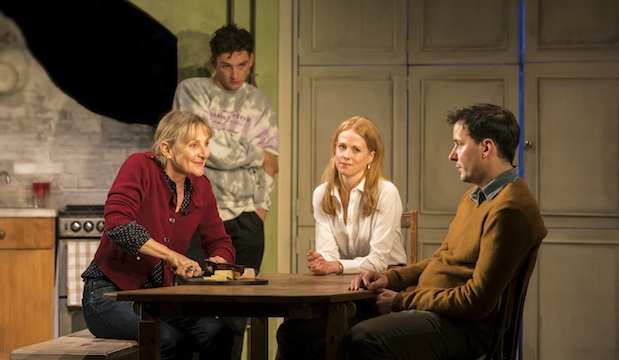 Once all are gathered, watching them converse feels like peering in on something intensely private. But with their bawdy humour, sparky quips at one another’s expense, and genuinely informative political commentary, they’re an engaging family to watch from a fly-on-the-wall perspective. Politically-disinterested Harriet is left baffled as the clan bounce lefty ideas off one another, asserting their liberal superiority over what they assume to be her financial advantage.

Time skips forward to 2007 for act two and eventually 2017 for act three; leaps stylishly orchestrated by Tiffany, who has the lights dimmed while his cast dance silently around the kitchen, moving furniture, changing outfits and ripping off dates from the wall calendar to move the years forward. Once settled into each new act, we witness shifts in the family dynamic too, as the younger generation grow into their adult personalities and Harriet becomes bolshy and assertive with the family. (When she says that she can fight her own battles in act two, we believe it.) Political references to Blair, then Brown, then Brexit also allude to each new decade – though the latter feels dated, leaving us two years behind the current, unsolved turmoil. 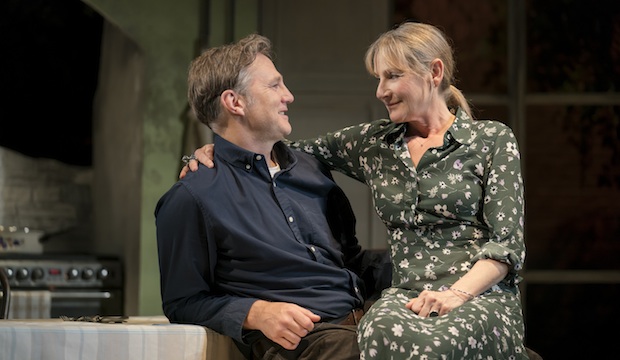 Lesley Sharp captivates as the family’s oversharing matriarch. When she’s dictating the dialogue – which she does a lot, much to the despair of her children – she holds the room and we’re wrapped in her emotions. ‘Am I interrogating? I thought I was conversing,’ she remarks, to chuckles from the audience. Her chemistry with smart, introverted dad David (David Morrissey) – who previously shone on the London stage in Julius Caesar (2018) and Hangmen (2015) – makes the story feel warm and life-like.

Glassy-eyed Laurie Davidson gives another deft performance, wearing Tom’s fragility on his face. Glance at him while his louder siblings are competitively bickering and you’ll see the torrent of his internal turmoil breaking like waves across his face.

As a collective, Thorne’s characters in The End of History… are riddled with contradictions – the textbook definition of what makes complex characters tick. It’s these inconsistencies – Harriet eating a Chinese takeaway when no one’s watching after declaring herself allergic to GMO, or David slipping money into Tom’s pocket despite it being against his parenting stance – that paint such a joyfully full image of family life. 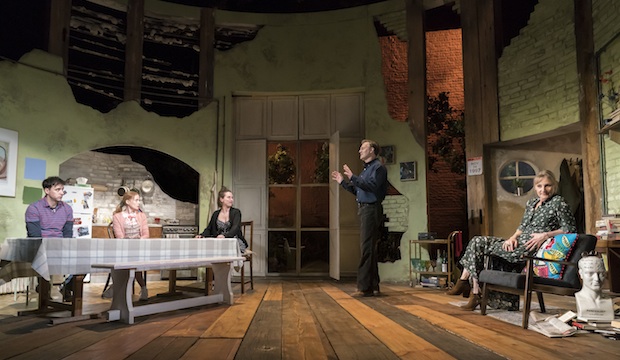 The family gathered in the home in The End of History

Thorne’s script is witty, wordy and full of wise nuggets on past political matters. It also successfully presents us with a dramatised version of the often observed shift in interests between the politically-engaged, outward-looking baby boomer generation and inward-analysing, ‘I, I, I’ millennials. Beyond that, though, The End of History… has little of relevance to say. Still, if you’re a fan of Thorne and Tiffany’s work, it’s worth a watch. Particularly if you think you might catch a glimpse of your own family dynamic being played out in the often hilarious narrative.