After controversy over authorship, Kwame Kwei-Armah and Idris Elba’s in new multimedia musical brings spirit and soul to the Young Vic

5 CW readers are interested
Tree, Young Vic review 4 Tree, Young Vic review Anna Scriven
Tree is a story about a young man negotiating his white and black heritage in contemporary South Africa. But the fictional themes of identity and disctrimination are echoed in the real life controversy around the creation of the play.

Billed as a collaboration between Young Vic artistic director Kwame Kwei-Armah and famous actor/dj Idris Elba, the musical provoked a row over authorship. Writers Sarah Henley and Tori Allen-Martinpublished a blog post claiming to have spent years developing the project with no credit in the final production.

The allegations have been strongly refuted by both Kwei-Armah and Elba, but have already raised some uncomfortable questions about the inner workings of the theatre industry.

As Tree transfers to the Young Vic after opening at the Manchester International Festival, the bitter backstory gives way to a vibrant immersive production. Staged in the round, with most the audience mostly standing around and amid the action, the show merges music, dance and physical theatre to energetic effect. 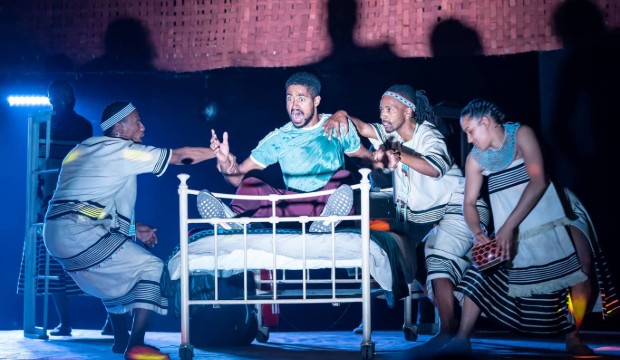 Arrive early if you want to dance. Instead of the standard pre-show hush and shuffle to find a seat, you’re greeted with thumping beats and disco lights as cast and audience cut some shapes together. On press night, director Kwame Kwei-Armah and star of the show Alfred Enoch were leading the celebration, grabbing spectators by hand and pulling them on stage.

The giddy gig energy soon fades as the drama starts. Enoch plays Kaelo, a young Londoner who is spiritually lost. Mourning his mother, drifting between jobs, recovering from a break up, he travels to South Africa to stay with this Afrikaner grandmother Elzebe (a pitch perfect Sinead Cusack).

The vast family farm is steeped in history and suffering as Kaelo gradually learns how his own backstory fits into the country’s apartheid past, current tensions and future hopes.

The writing isn’t especially subtle and dialogue veers towards mannered metaphor, but the expressive choreography by South African dancer and choreographer Gregory Maqoma and musical interludes from Idris Elba’s Mi Mandela make the story-telling engaging. Tree is more exciting as an experience, with the pre- and post-show dance party, than it is as a pure play. But in just 90 minutes the show manages to switch between celebration and grief, while eloquently unpacking the notion of privilege and identity.