Set in a graveyard, a desolate place dotted with wooden crosses, it’s about death and redemption. Its first image is striking: suddenly the absolute darkness of the stage is broken by two intersecting shafts of light coming from above, revealing a suspended cross at the point where they meet.

Darkness again, and this time it’s rent by the sound of crying. It’s a realistic, heartfelt, sustained expression of grief that somehow encapsulates all the grief the audience has ever felt. Slowly the stage lights up to reveal a mourner, his chilling cries taking on the modulations of song, slowly and painfully walking across the stage.

A group huddles centre-stage. Enclosed in a circle of light, they start moving, creating tableaux of sorrow and despair. Their bodies convulse and bend in on themselves. Arms stretch upwards. One dancer is lifted high. In the background a musician beats a repeated rhythm on a small drum.

Cion denotes Zion, the African church. Ravel’s Bolero was one of Maqoma’s sources of inspiration, the other being the character Toloki, a professional mourner who figures in the novels of the South African author Zakes Mda.

Cion is broken into a number of sections, loosely portraying Toloki’s travels through time and space. Maqoma, a tall, elegant figure and a compelling dancer is Toloki. He’s joined by the eight outstanding dancers of his Vuyani Dance Theatre, all barefoot and dressed in dark metallic grey trousers and tunics by BlackCoffee.

In the middle section the musicians break into their rendition of Ravel’s Bolero. It’s faster than the original, its melody is conveyed through singing in South African languages, and it is astoundingly effective. You sense Ravel himself might have approved.

If there’s one thing we regret it is not understanding the words, particularly when one of the performers comes downstage and launches into a brief but deeply felt rousing speech in Xhosa.

But then Cion’s musicians and dancers had already spoken eloquently. This is not a show where you need to follow every word, or rationally understand every detail; rather it asks you to abandon yourself to its extraordinary aesthetics, its vitality and its universal message. We urge you to see it. 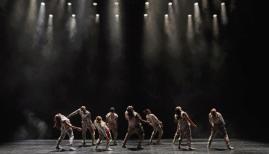