With Peter Gynt, David Hare returns for the National Theatre 2019 season, tweaking a classic Ibsen tale for the modern day

2 CW readers are interested
Peter Gynt, National Theatre review 3 Peter Gynt, National Theatre review Alex Colville
Watching Peter Gynt, David Hare’s loose adaptation of Henrik Ibsen’s Peer Gynt, feels like sitting in a reupholstered old armchair. What was sagging has been disposed of - dusty Norwegian reindeer jokes and rhyming verse have been cleared out, but old favourites have been conserved and refreshed. The trolls still cavort in the Hall of the Mountain King, but are now endowed with a whiff of Bullingdon elitism, clad in white-tie and pig snouts.

At heart this is still Peer Gynt. The tale of an Everyman voyaging through the surreal world of Nordic myth, a series of sketches from a single life sewn together by an unfulfilled quest to understand himself, solace finally provided in wholesome Christian values.

But when it comes to contemporary references, it’s as if Hare is trying to break some sort of record. The dialogue bulges with nods to ‘the now’ - Obi Wan Kenobi, Lidl, Fifty Shades of Grey and chillaxing all get a shout-out, along with Nandos, the Iraq War, Val McDermid and burst condoms. You name it, it’s probably in there somewhere. 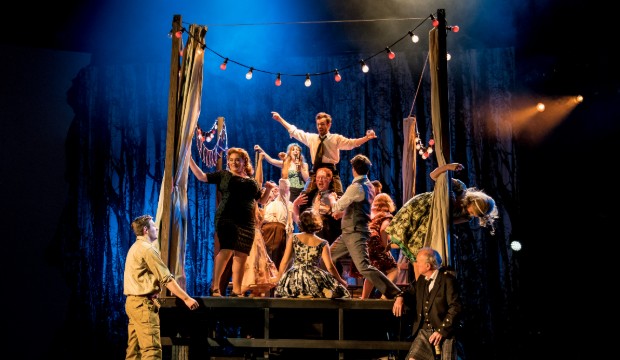 James McArdle (Young Chekov, Angels in America) delivers a remarkably outgoing Gynt, relocated to the Western Isles of Scotland and endowed with an earthy cynicism. Initially he comes across as the macho big-shot from the weights area at the local gym, returning from wars in the Middle East with a spring in his step, a cheeky grin on his face and a sack-full of overblown cock-and-bull war stories.

The ensuing phantasmagoria mocks the modern world’s ridiculousness and desire for drama. Admittedly most of the mockery is reserved for politicians: the ensemble cast send-up Davos elites in a song-and-dance number of their selfless philanthropy to avoid paying tax, whilst no prizes are given for who is being imitated when Gynt turns into an arrogant business tycoon with a string of golf courses in Florida.

But Hare pokes fun at the wider comic jokes of life, and the plays that try to imitate it (including this one). As in life, a man seemingly destined for importance later on can become a pathetic non-entity. Although given an entire scene to himself, the Mountain King (Jonathan Coy) ends up a tramp whose sole desire is to be an extra on the new Netflix film. 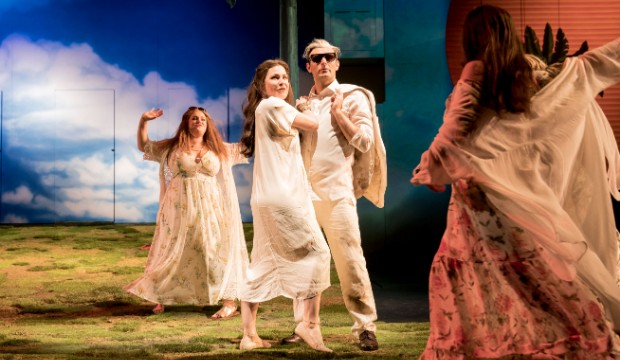 The ridiculousness is aided by director Jonathan Kent’s choices in set design, which can be inventive and subtle - a grassy lawn becomes a sea with a few lighting tweaks – or indulge in comic cliché, stars spinning around Gynt’s head when knocked out by running into a boulder.

Eminently watchable, even in Gynt’s peaks of arrogance and angst, McArdle wins us over with an endearing desire to excite and to connect, easily doing so with his zesty charisma. Though Hare's adaptation feels like a long slog at three and half hours, this lead performance is enough to keep us engaged.

Despite his many flaws, Gynt is successfully redeemed in our eyes, a testimony both to Ibsen’s character craft and Hare’s skills at adaptation.

Booking for Peter Gynt at the National Theatre is now open. Click here for tickets.