Steeped in memory, ambition and regret, this semi-autobiographical account of a mother, her two adult children and a long-awaited gentleman caller is not the standard Hollywood star vehicle. And Jeremy Herrin’s (Wolf Hall trilogy, People, Places and Things) insightful, delicate direction focuses on the subtleties of Tennessee Williams’s text, rather than relying on celebrity casting.

Yet Adams still shines the brightest, like the memory that runs deepest and remains most vivid. She captures the comedy of the faded Southern belle with tinkling small talk and prim, performative hand gestures. But there’s no parody in her portrayal of maternal ambition. As she postures and plots to marry off her awkward daughter, the palpable fear over the fate of an unemployed spinster is chilling and devoid of vanity.

Typically Amanda Wingfield is a comic, domineering and sour character, but it’s the warmth that’s striking in Adams’s performance. It’s especially moving to see the love and guilt that underlines her frustration over dreamy son Tom. Adams’s ability to undercut the overbearing aspects of Amanda and focus instead on a mother’s desperation to secure her children’s happiness and stability makes the play feel newly modern and relatable. The result is emotive, but also sweeter and smoother than Tennessee Williams’s spiky and often bitter text suggests. 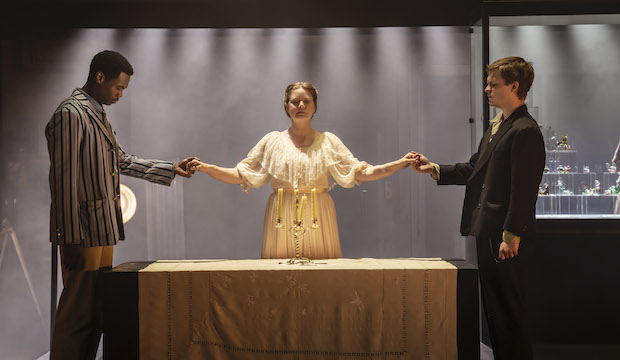 Director Jeremey Herrin casts the character of Tom as two different actors: Paul Hilton is the older Tom who narrates and talks directly to us, rooting the story in memory and the historical context of 1930s St Louis. He lurks on stage throughout the show, an omniscient presence who never participates. This duality emphasises the distance, depth and complex emotions that exist between past and present. It means the audience never forgets that everything we see is a recollection, inevitably warped and subjective.

It is the young Tom (a scrappy Tom Glynn-Carney), who negotiates with his mother and worries about his sister, while also fantasising about escaping them both. Making an impressive stage debut as Laura, Lizzie Annis creates a powerful performance out of weakness and fragility. The program notes that Annis has cerebral palsy, and the play makes strained references to Laura being ‘crippled’, yet it’s the emotional struggles and anxiety that feel most restrictive and painful. 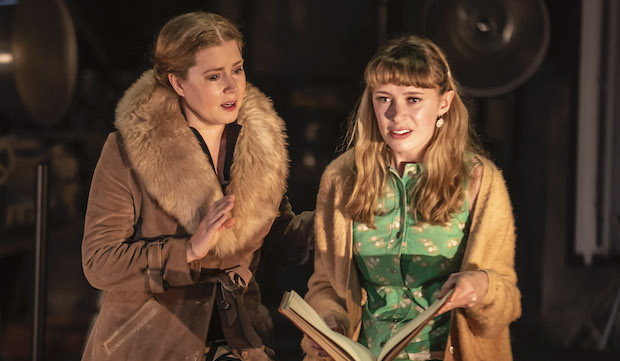 Amy Adams and Lizzie Annis in The Glass Menagerie. By Johan Persson.

The stage design by Vicki Mortimer (Follies, Wise Children) reflects the notion of subconscious coming to life, with dingy abstraction, exposed lighting and a shimmering cabinet of glass creatures. And video projections by Ash J Woodward repeatedly zoom in on a picture of the absent father, reminding us how Amanda was abandoned to care for two children alone.

Together these memories build a portrait of a family that is fractured and dysfunctional but still loving. The boldness in this revival comes, perversely, from its notable delicacy. The resentment that runs through Tennessee Williams’s classic is softened into regret. As the older Tom Wingfield looks back, he shows us that adventure and freedom can’t extinguish the formative force of familial bonds.