Emma Rice's bold, bright and brilliant stage adaptation of Angela Carter's Wise Children is available to stream on the BBC

Commenting on the TV adaptation, director Emma Rice said: 'I dreamt about adapting Angela Carter’s Wise Children for years before it became a reality, and, when I finally did make it, it was the first piece I made for my new company. It’s a show I carry deep in my heart; a love letter to theatre, to survival, to family and family of choice. When The Space commissioned us to film it for the BBC I almost burst with pride! I delight in the fact that we now get to share this glorious story with so many others, and hope that the fun, truth, love and generosity poured into it will find its way into sitting rooms across the country! What feels even more perfect is that we’re releasing it now. Today, more than ever, we need the joy, resilience, hope and love of life which runs through the veins of Wise Children.'

‘Comedy is tragedy that happens to other people’ we are told in the midst of singing, dancing, joy and trauma that is Emma Rice’s Wise Children.

And this shrewd interplay between exhilaration and devastation runs through this vibrant stage adaptation of Angela Carter’s 1991 novel. It’s a riot of a show, bringing oodles of music theatricality and imagination to The Old Vic.

On a stage littered with lighting stands, curtains, a caravan and a chorus of dancers, we’re taken from 1989 Brixton to Victorian vaudeville and back again, via the variety shows of the roaring twenties and two world wars.

With twin chorus girls Nora and Dora Chance as narrators, we discover how the family tree is like a muddled up mirror of Shakespeare: multiple sets of twins, repeated cases of mistaken identity, bawdy comedy, flashes of violence and an enduring obsession with the theatre. 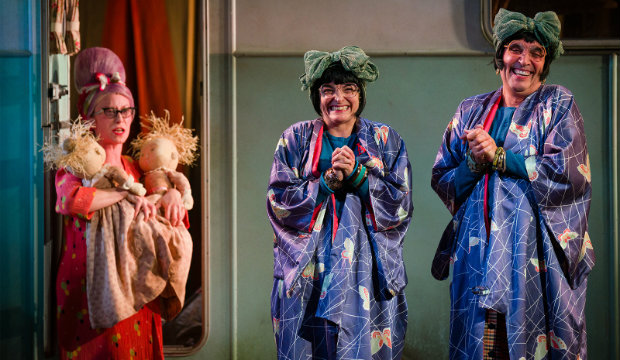 An exuberant ensemble cast switch roles, swap genders, don wigs and animate puppets to switch between a series of different parts. The story stretches back three generations. When a prestigious old thespian discovers that his twin sons Melchior and Peregrine are actually illegitimate, the jealousy, bloodbath and bodycount rival Othello.

As the twin boys grow up, Peregrine becomes a hedonist and Malchior strives to follow his parents’ path as an esteemed actor. But in a tawdry Brixton boarding house for down ‘n’ out thesps, Malchior seduces a chambermaid then abandons her to give birth to twin daughters Nora and Dora – and to die very shortly after.

The orphaned babes are scooped up by eccentric landlady, ‘grandma’, and swept into a life of nudity and crude pleasures. Occasionally, Peregrine swoops in to play kindly Uncle, funding dancing lessons and trips to the seaside. 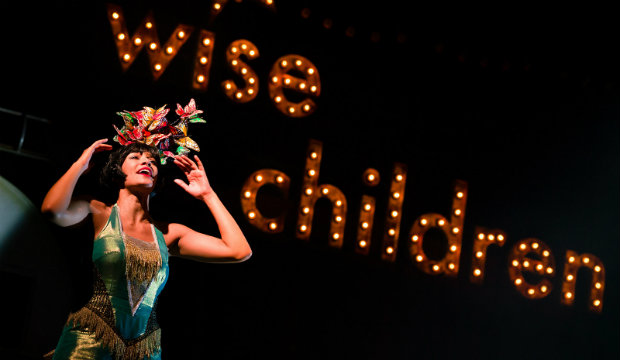 In these flashbacks to Nora and Dora’s unconventional childhood, we discover the oxymoronic reality of Wise Children: the abuse that kills innocence and corrupts childhood. It’s made all the more bitter and uncomfortable in the colour and chaos of the chirpy production.

But it’s in this disturbing truth that this show is most powerful. The rag-tag adventure is a fable of resilience and the limitations of recovery. Instead of victims, we see survivors. Instead of crying and retreating, the twins don their red shoes and flout their talents dancing on stage. You wonder if the the reality of trauma has been overlooked in favour of creating a show that is, undeniably, relentlessly entertaining.

But then, in a potent final scene, we see the story distilled down to the women, different generations, young and old versions of the same characters, all gathered together on stage. Each is in someway damaged and abused, yet they are still strong, spirited and singing.