After pushing the boundaries with edgy addiction comedy The Motherf**ker with the Hat, The National Theatre once again puts substance abuse in the spotlight with a new play about facing up to the truth. But in this arrestingly ambivalent production, the contradictions and consolations of rehabilitation are handled deftly in a tremendous performance from Denise Gough. Playing the part of actress Emma she is a torrent of emotions and urges, each of which feel raw and fresh. 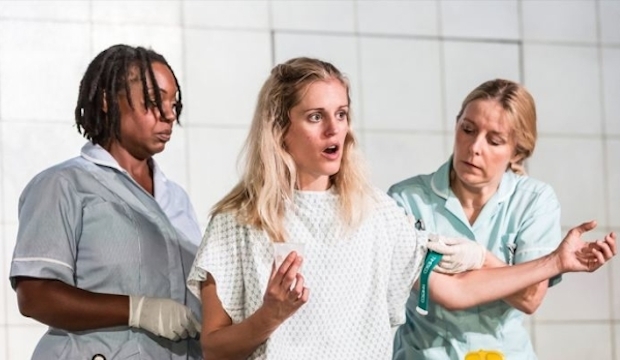 People, Places and Things reunites the National with Headlong Theatre Company (Earthquakes in London, The Effect) and its artistic director Jeremy Herrin. Herrin is flying high following the spell-bindingly eerie The Nether (Royal Court, Duke of York's theatre) and the RSC's versions of Hilary Mantel's Wolf Hall/Bringing up the Bodies, which won numerous awards and have now found their way to Broadway.
This latest production is just as visually impressive and ambitious, with a dynamic set that shifts from hospital sterility to warehouse raves, with one alarmingly nightmarish sequence during Emma's early recovery where she is bombarded with endless version of herself.
Having already impressed in his work for Paines Plough, playwright Duncan Macmillan channels the same emotional intensity and instability that so gripped us in Lungs.
Gone are the days when a candid portrayal of drug abuse on stage is shocking (though if such things do offend you, steer clear). But People, Places and Things is disturbing in a more lingering way. It's elusive, uncompromising and just as you think you know enough to judge, a few words unsettle your entire perception.