Then a young man brings a tramp into his home. And so begins this revival of Pinter’s classic three-hander: a three-part, three-hour onslaught of talk, tension and inaction.

In his first spell on stage for 19 years Timothy Spall plays Davies the vagrant with the simpering menace that Harry Potter film fans will recognise from Wormtail. There’s cartoonish flair in his tufty hair and toothy sneer, with flashes of Dickensian exuberance in the tirades of garbled speech. Compared to his familiar big screen presence, Spall is small and frail on stage (emphasised by two toweringly tall co-stars). But any sympathy you feel for this pitiful character is unsettled by a steely, insidious dominance. 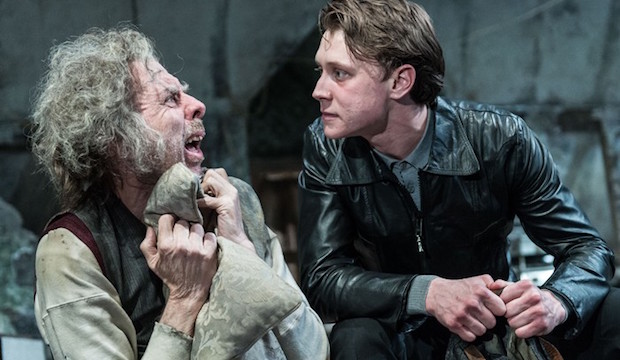 Timothy Spall, Davies & George MacKay, Mick : photo by Manuel Harlan
Aston, the vulnerable, trusting young man who befriends this tramp is played with predictable slow, stuttering speech by Daniel Mays. At first it feels like the performance is overshadowed by Spall. Then, in the middle section, under a stark spotlight, Mays makes that stunning speech about mental lucidity and his experience in an asylum palpably powerful. (It’s rare to find an audience so silent and still).

Proving that three really is a crowd, Aston’s big brother Mick freights the already fragile dynamic with his own underhand agenda. George MacKay’s lithe lurking presence is unnerving and he breaks the steady stream of talk with binary bursts of violent, hyperactive speech then sinister silence

Much is said. Nothing happens. The more words are repeated, the further they splinter from action and the three-hander hollows out any sense of hope.

The Caretaker is Pinter at his most Beckettian, with an absurdist, despairing undercurrent to the characteristic power play and pauses. And Matthew Warchus’ weighty production is perhaps too reverent. Split into three sections, with a vast cluttered set, it feels overfed, stuffed full of language — especially compared with Jamie Lloyd’s taut take on Pinter at the Trafalgar Studios. At three hours, it's long and challenging. You do stay gripped thanks to the performances. It's an overly safe and stolid production, but the sheer talent of the trio of actors makes this production of The Caretaker memorable.