Life off-stage in Gerald Barry's comic opera is more dramatic than anything the principal character, himself a composer, can dream up

By way of a springboard, the same composer's earlier opera, The Intelligence Park, is given its first Covent Garden staging in the Linbury Theatre. Here is a taste of things to come: madcap characterisation, cheerfully raucous orchestration and a delicious playfulness with words which it is tempting to ascribe to Barry's Irish background.

The opera is set in 18th-century Dublin, a little nod to the world of Handel, whom the composer reveres, and productions of whose operas come thick and fast these days. His Agrippina a current success up the stairs in the main auditorium of the Royal Opera House. And Messiahs aplenty are on the Christmas horizon. 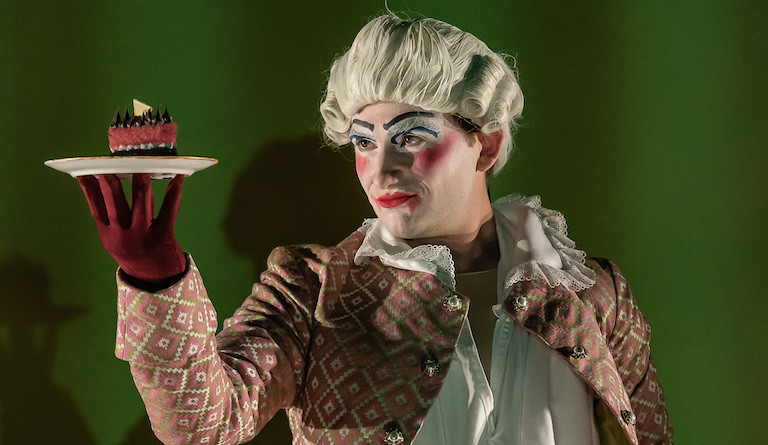 Michel de Souza, manfully performing on first night while unwell, plays the harassed composer, marrying for money and prompting losing his flighty bride to a starry castrato who is the talk of the town. Poor Paradies struggles with his new music, as eager Jerusha, sung with indefatigable glee by Rhian Lois, cavorts with Serafino, sung by counter-tenor Patrick Terry. All make light work of Barry's stratospheric score, even de Souza leaping from his natural baritone to eye-watering falsetto.

Looming and booming over this triangle is the father-in-law, Sir Joshua Cramer, while friend D'Espardieu, a deft Adrian Dwyer, darts anxiously to the composer's side.

The picaresque action is played out against a cartoonish set, and here are all the elements of Georgian society, perhaps seen through the prism of Blackadder: wigs and waistcoats, breeches and brocade, tea and tantrums. Exaggerated and outlandish by director, designer and lighting designer Nigel Lowery, this highly-flavoured world spins round at breakneck speed in a galaxy of music by Barry. 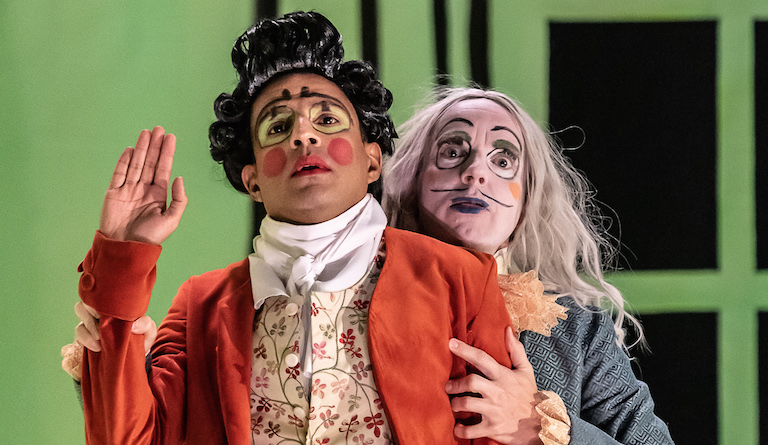 The relentless, driving torrent of notes is conducted with aplomb by Jessica Cottis, courtesy of 16 players from the London Sinfonietta, notably the hard-worked wind and percussion. The score has all the hallmarks of Barry (now 57) as a composer finding his voice. The Intelligence Park dates from 1990, when it was staged at the Almeida. As he explained in interview with Culture Whisper, his younger self calculated that writing an opera would pay best, and off he went.

We all improve with age, of course, and Barry is no exception. If The Intelligence Park is frankly tough on the lugholes, it is brilliantly sung and visually entertaining. And if you love made-up words – an honourable literary tradition from Shakespeare onwards – there is much to enjoy in Vincent Deane's proudly abstract libretto.

Many operas later, and with that Alice on the horizon, it may help to think of The Intelligence Park as the operatic equivalent of a much-loved band's first album. So much poured in, at top speed, loud, louder and louder still. But here are the seeds of great things to come, and completists will want this in their collection.

The Intelligence Park is a co-production between The Royal Opera and Music Theatre Wales in association with the London Sinfonietta. It is sung in English and other languages, with English surtitles. Further performances are on 27, 28 Sept; 1, 2, 4 Oct. General booking for Alice's Adventures Under Ground opens 9AM, 24 Oct
by Claudia Pritchard