Manolo Blahnik's wearable works of art mingle with the sumptuous fine and decorative arts at the Wallace Collection. Exhibition extended

A newly-opened exhibition at the Wallace Collection is set to change that, providing an unparalleled opportunity to view pieces from Blahnik's nearly 50 year career, nestled among one of the most inspiring collections of fine and decorative arts in London. 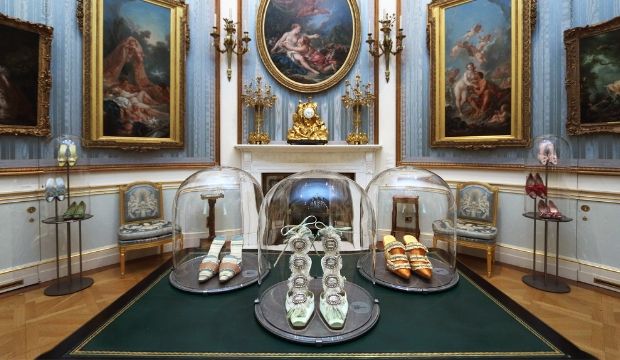 It is fitting that the designer's first major exhibition is being held in London. As a lifelong Anglophile, Blahnik once told us, 'I love England. My obsession has always been London – since I was a child', citing Charles Dickens and Enid Blyton as the quintessentially British forces that shape jolly memories of his childhood.

And the Wallace Collection has evidently shaped not only his relationship with the capital, but many of his designs: 'It has been a point of reference for me since my early days in London. It was - and remains - one of my favourite museums with the most refined selection of art.' 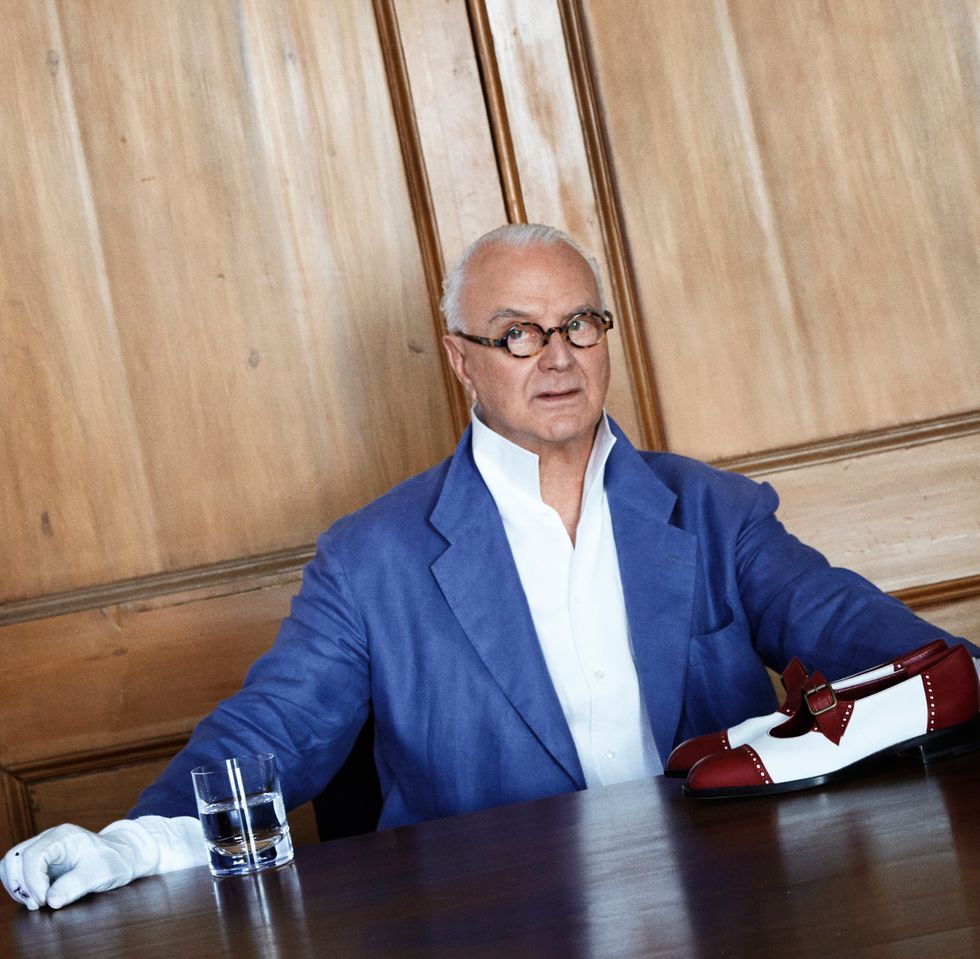 The shoes, which number about 150 are grouped in themes as a response to the works of art in the 10 galleries throughout which they are displayed.

The West Room, dominated by Mrs Robinson, a large Gainsborough portrait, speaks to Blahnik’s long-affirmed love of Britain and the traditional pursuits and pastimes of the landed gentry, reflected in shoes that showcase natural motifs and ribbons, tartan and tweed. 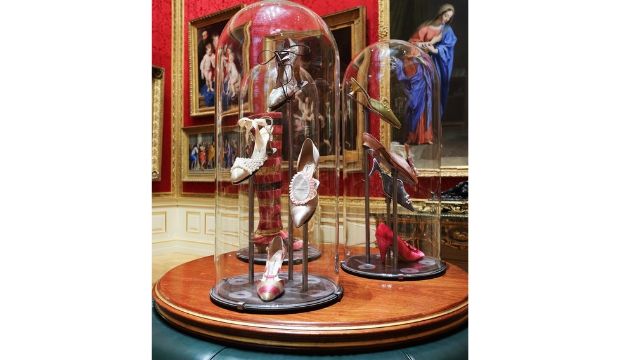 In the Oval Drawing Room visitors will see some of the candy-coloured designs used in Sofia Coppola’s Marie Antoinette, alongside Fragonard’s Swing and Boucher’s Mme de Pompadour, two icons of romantic painting.

The Boudoir Cabinet, a vitrine-lined anteroom, houses countless exquisitely detailed gold boxes. For the duration of the exhibition, they will be joined by opulent, jewel-encrusted slippers and shoes. 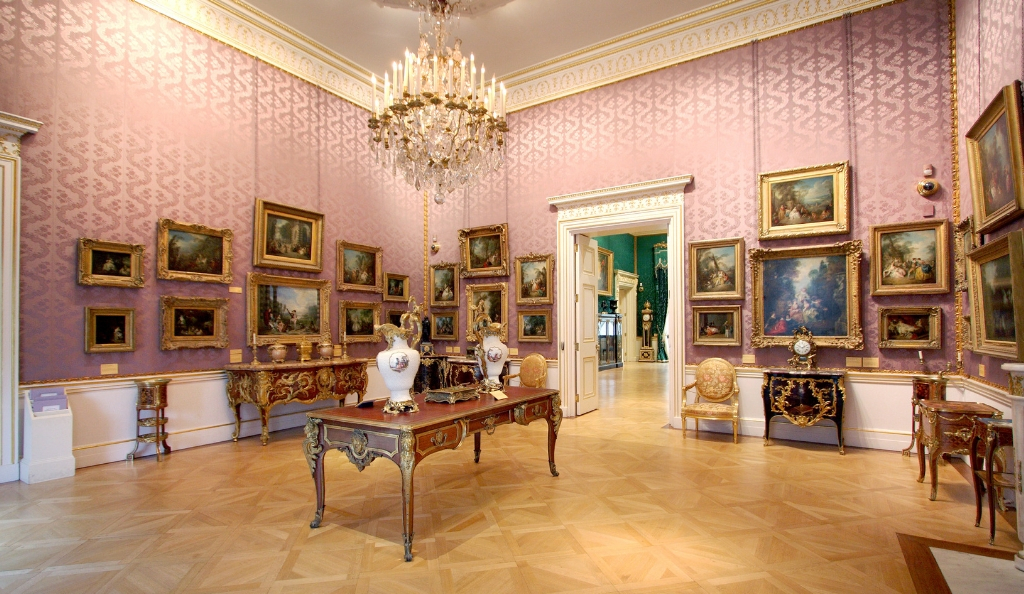 The fashion world has laid claim to Blahnik - understandably so, for his 50 year career owes much to the early support of the industry, not least Diana Vreeland the legendary editor-in-chief American Vogue. But according to Kristina Blahnik, CEO of Manolo Blahnik, her uncle ‘doesn’t think he’s in the world of fashion, he thinks he’s in the world of beauty.’

When it comes to beauty, the spectacular paintings, furniture and objets d’art in The Wallace Collection certainly provide a sumptuous backdrop for a hand-picked selection of Blahnik’s most special creations. But at times the relationship between shoes and art can feel off-balance.

Delicate and ornate as they are, the shoes sometimes feel dwarfed by the very beauty with which they are surrounded: works of art, gilded frames, antique furniture and objets d’art glimmering against opulent wallpaper all vie for attention. 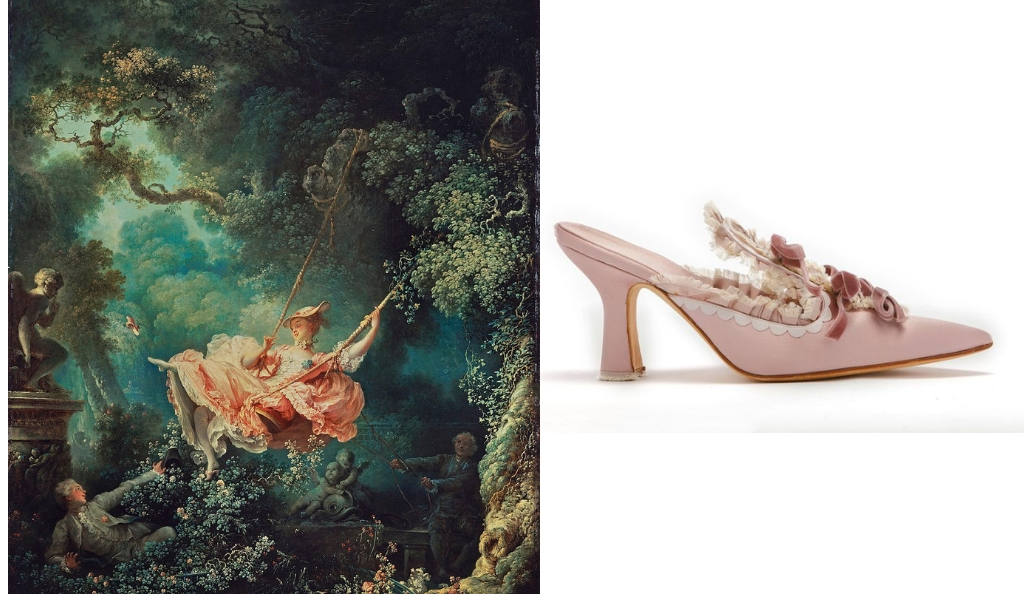 And while the need to present the shoes behind glass is understandable, it is nevertheless a shame, as it makes them feel static and, in a way, bloodless, especially compared to some of the exemplary fashion exhibitions of recent years.

But to focus solely on the shoes is to miss the point. This exhibition is special not simply as a chance to view decadent footwear - there are countless boutiques in the capital for that. 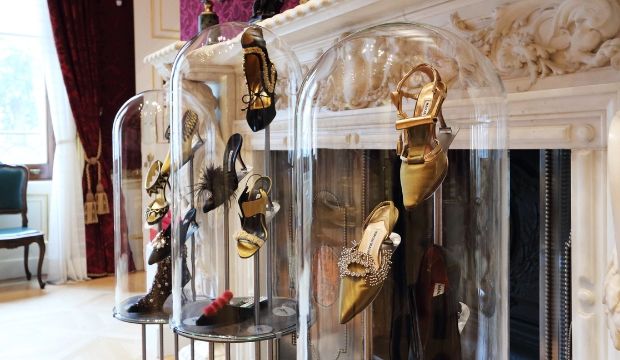 Instead, it is an appreciation of the way in which the art has informed and shaped the designs themselves, which in turn sheds new light on old treasures. ‘Each Manolo is an education,’ says Kristina Blahnik. ‘As is each painting. You could spend hours and hours - this is what people did for entertainment. It was something you learnt about, you learnt about every little detail of a painting, everything was a considered moment.’

When it comes to detail - be it beading, feathers, fringe or ribbon - Manolo Blahnik is a real master, and to see so many of his masterpieces together, in such magnificent company, is a true privilege. 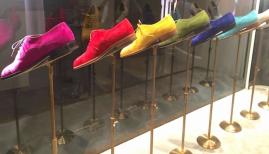