49 CW readers are interested
Moving to Mars, Design Museum, review 5 Moving to Mars, Design Museum, review Kristina Foster
We have been fascinated with Mars for thousands of years. It is visible from Earth with the naked eye, a faint red splodge that seems to wander through the night sky in the most unusual way. As the picture of our planetary neighbour became clearer, we speculated about life on its surface, possible seas, forests and ‘little green men', right up to the 50s. Now, we know better, but the quest to further understand – and one day inhabit – Mars has driven us to invest many billions in getting there. Amid renewed interest in space travel in the year that marks the 50th anniversary of the first moon landing, the Design Museum’s exhibition, Moving to Mars, proves especially captivating.

The exhibition starts by explaining the history of our fascination. A clay tablet inscribed with ancient Babylonian text provides the oldest recorded observation of the red planet, dating back to around 1000BC. From here we are propelled from the speculative to the factual, with an immersive (and rather spine-tingling) installation that uses photographs taken by the Curiosity Rover to teach us about this hostile world. For example, Mars’ atmosphere is 95% carbon dioxide, while ours is 0.4%. The dust storms that regularly engulf the planet – sometimes for months at a time – are extremely toxic and the low gravity would have a detrimental affect on our hearts and bones. There is no way for humans to survive in this environment without some sophisticated protection and a lot of ingenuity. 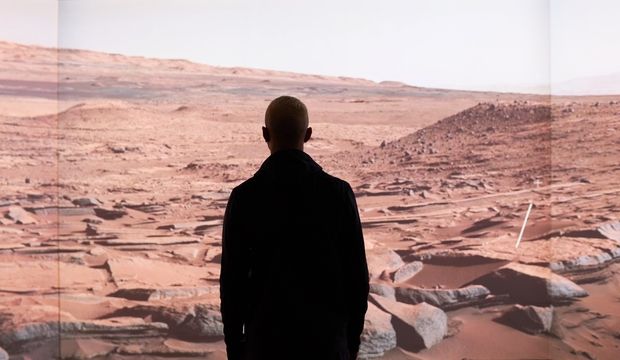 ‘On Mars Today’ multi-sensory experience. With thanks to Oxygen Model Management. Photo: Felix Speller for the Design Museum

But before we even get to Mars, there will be challenges. It would take astronauts over eight months to reach the planet. That’s a long time to be travelling in an extremely confined and dangerous environment, watching Earth shrink away into the darkness day by day. One of Nasa’s main concerns with such a journey is the psychological wellbeing of any would-be Martians. Artist Lucy McRae's film, on display here, explores how we would prepare body and mind for such a trip.

The next gallery treats visitors to a range of architectural plans for our new extra-terrestrial life. The homes that designers have modelled for us take advantage of the Martian soil and hilly landscape. Once we arrive, our houses will probably be rather cave-like, dug into the planet’s surface, with thick walls to protect us from all that solar radiation. To walk around outside, we’d need very clever space suits, but what about indoors? London-based designer Ræburn has put together a collection that envisages the use of recycled fabrics, such as used landing parachutes. But the fashion-conscious Martian will have to be a dab hand with a needle and thread, as any clothes they haven’t arrived in would have to be made from patterns after landing. 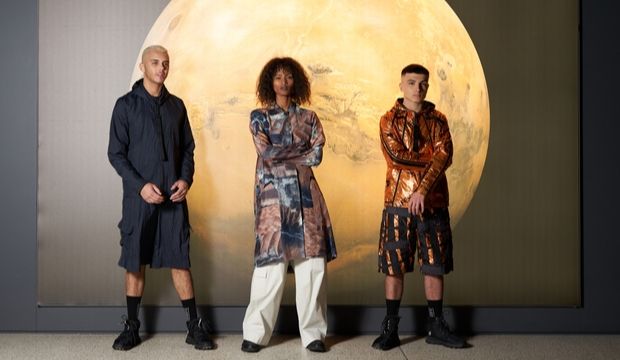 Could these Ræburn designs be all the rage on Mars? With thanks to Oxygen Models. Photo: Felix Speller for the Design Museum

Future inhabitants of the red planet will also have to grow their own food. Here we are given examples of trays of cress under artificial light, their roots growing in nutrient-rich water. No soil is needed. It is a system we already use commercially on Earth. Visitors can also explore a mock-up of a Martian interior, complete with kitchen sink and those all-important sewing machines.

While this all sounds very exciting, curators sound a note of caution. Wealthy entrepreneurs like Elon Musk might be chomping at the bit to start a whole new race of Mars-dwellers, to build cities and colonise the entire solar system, but this is still the stuff of fantasy. If we do land people on Mars in the next century, any manner of Martian civilisation remains pie in the sky. Other scenarios include transforming this dusty ball of lethal hazards into a green planet – a process that would see the gradual introduction of simple plants and the atmosphere transformed over thousands (possibly millions) of years. Computer simulations attempt to predict how this might look in what is described as a 'thought experiment and work of art'. 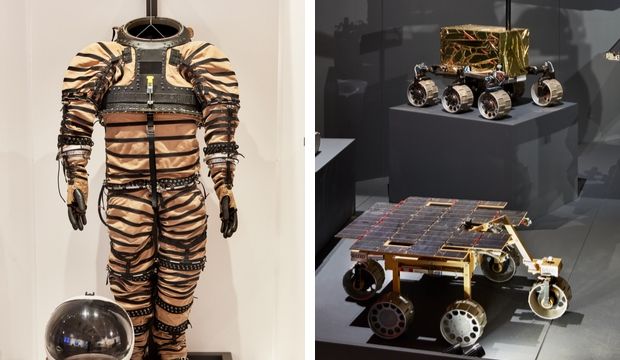 As visitors leave the exhibition, a film of interviews plays, putting forward arguments for and against pouring energy and money into exiting the only home we have ever known. Climate-change activists worry that missions to Mars, and the idea of a ‘back-up’ planet, divert attention away from caring for our own. They believe that we shouldn’t try to colonise other worlds before we’ve righted the wrongs inflicted on this one. Ironically, the current state of Mars is as much a warning as an opportunity. Once furnished with a healthy atmosphere and deep oceans (and possibly life), it is now barren, its atmosphere toxic. The same may happen here if the Anthropocene (the age of humans) continues as it does.

This is a stylish and inspirational exhibition, and will surely have even the most space-averse visitor thinking about the possibilities of inter-planetary exploration. Kids will love it, too and it is set to be a half-term favourite. Be sure to book early.