Much of Sibande’s work centres on her alter ego, Sophie, who manifests as life-sized models, cast from the artist's body. Through the years Sophie had been dressed in an ever-evolving series of costumes that chart her journey from servitude to empowerment. Her uniform pays homage to Sibande’s ancestors, from her great-grandmother to her mother, who all worked as domestic servants.

Sophie’s journey is punctuated by a shift in colours, moving through the exhibition from blue to purple to red and, in doing so, addressing three major epochs in South Africa’s history. In the first room we are greeted by two figures, one dressed in the blue uniform of domestic work, the other in purple, a colour that became a symbol of resistance during apartheid. Long live the Dead Queen (2009-13), illustrates our heroine, with eyes tight shut, imagining the possibilities of the future, of what she might become.

In the next room we are greeted by a series of photographs from her next phase of transition, The Purple Shall Govern (2013-17), visualises a strong goddess-like woman. This colour choice was inspired by Cape Town’s 1989 anti-apartheid protest, which became known as the Purple Rain Protest because of the dye that police sprayed at the crowds. This version of Sophie is a woman seeking redress. 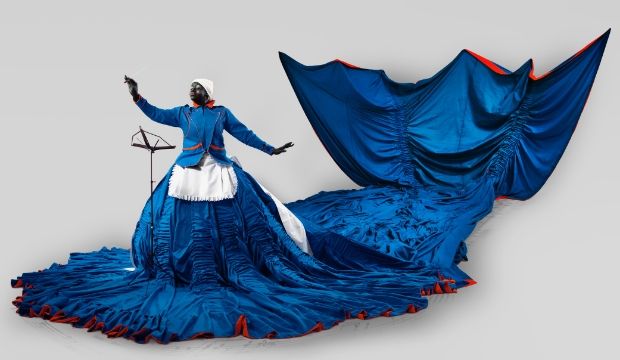 Next we see Sophie become an almost mythical being. A darkened room contains an installation that merges gothic horror with science fiction. The now-familiar figure is wrapped in purple tentacles, which seem to tether her to the wall, where they spread outwards like tree roots. She throws her arms up, as though she is drawing power from the forces of nature. Her final transition is red, the colour of anger and revenge. In the last room we see her in photographed tableaux as a powerful high priestess with the ability to heal. Apartheid is over, but bitter problems remain.

Although this exhibition opens alongside the 1-54 Contemporary African Art Fair, it runs in the Terrace Rooms until 5 January 2020.