An exhibition of work by pioneer of electronic art, Nam June Paik, lands at Tate Modern

Today, video and electronic works have almost become a cliche of contemporary art, yet when Paik was working as an artist in the 1950s, these new technologies represented a tantalisingly under-explored realm. Paik’s legacy as the ‘father of video art’ is now the subject of a massive new retrospective at the Tate which brings together over 200 of the artist’s works, including a throng of his ‘video sculptures’ and immersive installations.

‘Every Nam June Paik exhibition I’ve been to has been loud’, says Sook-Kyung Lee, one of the exhibition’s curators, straining to be heard over a cacophony of clanking metal, the tinkling of a piano, indistinct howls, and, of course, the familiar squawk of the television. One by one, we meet the curious contraptions generating this delightful din: humanoid robots, jungles of video monitors, synthesisers, and towering walls of screens. Paik studied classical music before moving to West Germany in 1954 where he would meet a bevy of experimental (and eccentric) artists and composers such as John Cage and George Maciunas before joining their avant-garde collective, Fluxus, in 1962. 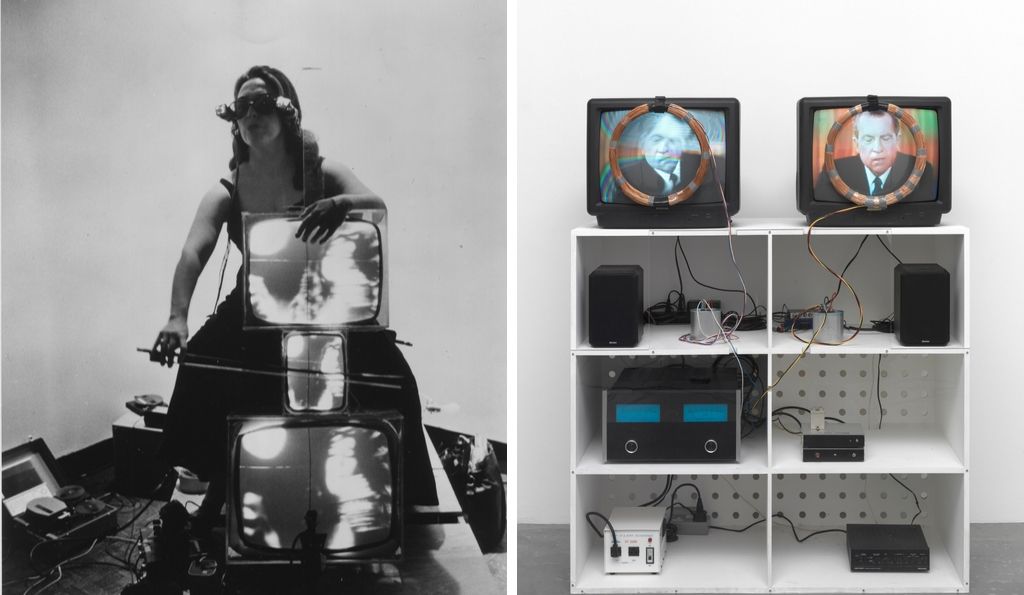 It was here that Paik began to develop his multi-disciplinary style which boldly embraced sound and audio-visual elements. His first solo exhibition in 1963, Exposition of Music - Electronic Television, was a raucous affair; the head of a slaughtered ox was displayed, violins were dragged along the ground by a string and his friend and fellow artist, Joseph Beuys, smashed a piano in an unrehearsed frenzy of live performance. The exhibition has brought together many of these early works, but the truly weird and wondrous bits come later in his oeuvre.

TV Garden (1974), a collection of monitors nestled in a bed of tropical plants is a buzzing botanical marvel and it’s hard to resist a grin looking at the smiling faces of ‘Aunt’ and ‘Uncle' (1986), two robotic relatives made of a stack of tellies. While some works seem quaintly dated with old electronics recalling the fustiness of ‘70s living rooms, it’s astonishing to see others preserve themes which are still pressingly current. CCTV cameras pervade the show, but rather than portraying surveillance as an insidious force, Paik uses these devices as a way to find common ground between technology and the themes of beauty and spirituality in deliciously simple and even humorous ways.

This playfulness is at risk of being lost amongst the surfeit of posters, wall texts and obscure ephemera. One feels compelled to wade through all this literature even though we would much rather keep our eyes glued to the TV. However, the exhibition rightly presents Paik not only as a deeply profound artist but also as a prophet. He envisioned a digitally-governed future where telecommunication devices would connect everyone around the world through an ‘electronic superhighway’. An entire room is dedicated to Paik's experiments with broadcast technology featuring video works such as the wonderfully random Wrap around the World (1988) which brought footage of David Bowie conversing in Japanese, the Viennese Art Orchestra, and a game of elephant soccer to over 50 million viewers in 10 different countries.

In 1993, Paik was invited to represent Germany at the Venice Biennale and, amazingly, the Tate have reconstructed his mesmerising Sistine Chapel for the first time since it won him the Golden Lion. This immersive, full-room installation uses 34 projectors to project a kaleidoscopic sequence of wildlife documentaries and adverts interrupted by performances by Bowie, Janis Joplin and Allen Ginsberg. This visually ecstatic work is a fitting pièce de résistance for a true Michelangelo in his field.