15 CW readers are interested
Dora Maar exhibition review, Tate Modern 4 Dora Maar exhibition review, Tate Modern Emily Spicer
You may not be familiar with the work of Dora Maar, unless you know the details of Pablo Picasso's biography. For decades she has been seen only as his tragic muse, a footnote in his epic career, overshadowed and overlooked. This exhibition at Tate Modern hopes to change all that, to give visitors an insight into her innovative work as a photographer and her later works on canvas. However, Picasso's impact on her life proves difficult to ignore.

Maar was born in Paris in 1907, but her father’s work took the family to Argentina, where she spent her formative years. On her return to France, and to mark the opening of her photographic studio, she changed her name from Henriette Theodora Markovitch to the snappier Dora Maar, taking on commercial assignments for clients including Ambre Solaire and the magazine Rester Jeune.

It was while trying to find innovative ways to advertise hair products and face creams that Maar’s talent for surrealism emerged. For a fashion shoot she captured the elegant back of a glamorous model, but replaced her head with a glittering star. For another assignment, presumably commissioned by the makers of an anti-ageing cream, she superimposed the image of a spider’s web (complete with arachnid) over the face of a young woman.

In these images, we see Maar’s playful side. A mannequin’s hand protrudes from the inside of a shell like a nightmarish hermit crab, at once an amusing assemblage while also prompting a sense of mild horror. It was such work that earned her the respect of prominent surrealists, such as André Breton and Paul Éluard, and she soon became a member of this mostly male, macho group. 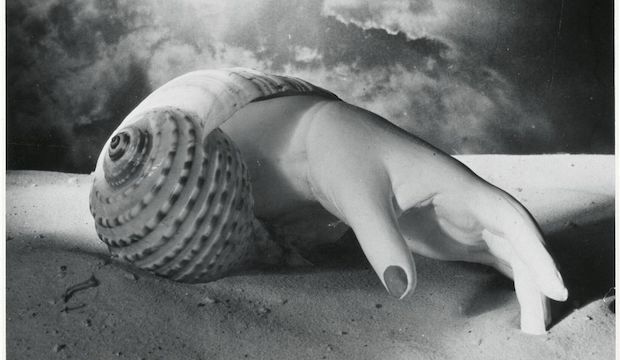 To win admiration from such men, Maar had to be commanding, tough and thick-skinned. But her left-wing views also matched theirs. This was the 1930s and Europe was in the grip of the Great Depression, so feeling the pull of reportage, Maar took her camera to Spain, Paris and London and captured the desperation and hardship she witnessed there with sensitivity and artistry. A whole room is dedicated to this work and it is one of the best in the exhibition. Haggard French artists wrapped in blankets play cards and children play in doorways. All life is here.

In 1935 Maar met Pablo Picasso. While she was at the zenith of her career, he was at the lowest point of his and hadn't picked up a brush in months. He was attracted by her defiant spirit, as well as her beauty, and was reinvigorated by her intelligence and independence. She taught him new methods of photography and printmaking and it was, in fact, the politically minded Maar that persuaded him against fascism and inspired him to paint Guernica in response to the bombing of the Spanish town of that name. Maar then became his muse (he had first become infatuated with a photograph of her taken by Man Ray) and he made hundreds of portraits of her. But while this nine-year relationship helped Picasso, it would ultimately prove devastating for Maar.

Despite being in a relationship with Maar, Picasso continued to see Marie-Thérèse Walter, with whom he had a daughter. He was unable (and probably unwilling) to choose between the two, so told them to fight it out, recalling that the scuffle was one of his ‘choicest memories’. This sadistic and cavalier attitude towards women coloured all of his relationships. Walter was to eventually commit suicide. 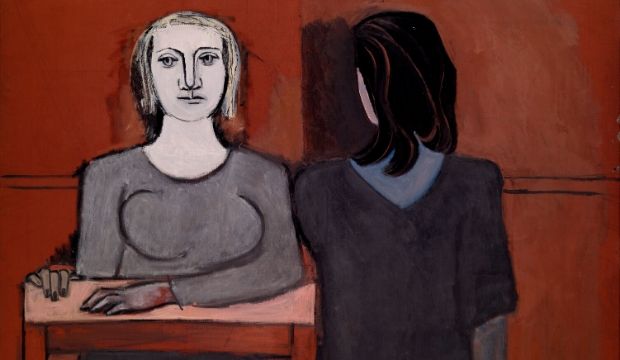 One of Picasso’s most famous paintings of Maar is his Weeping Woman (1937), displayed in Room Seven. He painted several such canvases depicting Maar in tears, claiming that he was representing her real essence. But she disagreed. 'All [Picasso’s] portraits of me are lies,' she retorted. 'Not one is Dora Maar.'

That Picasso had a hold over Maar is evidenced by the fact that she largely abandoned photography, at his encouragement, instead taking up painting. For a while her style closely mirrored his, as demonstrated by her painting The Conversation, which depicts her frosty relationship with Walter, but the penultimate room of this exhibition contains her spare and desolate landscapes, marking a dramatic departure from her bold photographic work.

After a particularly tough few years following the break-up with Picasso, her father’s move to Argentina, her mother’s sudden death and the harsh realities of life in Nazi-occupied Paris, Maar’s mental health suffered and she was institutionalised under the care of one Jacques Lacan. There is a sombre portrait of him here, painted in sullen greys. It is difficult to imagine that the same woman created this image and the playful photographs at the start of this exhibition.

Seemingly wracked by guilt for the way he had treated Maar, Picasso bought her a house, where she would spend the rest of her long life painting in relative isolation, never again to regain the artistic success she had enjoyed in the 1930s. Although she never really picked up her camera again, she did experiment in the darkroom with photograms, but it seems that her light had dimmed. Who knows what Maar might have achieved had she never met Picasso, and this exhibition ends on an uncomfortable note. But for all the suffering and difficulty she faced, she never gave up making. Art was her life.