Disorientation is at the heart of this vast exhibition. Visitors can choose to enter one of two entrances which introduces them into different parts of the survey, which, rather than following a chronological trajectory, organises Riley’s work into themes such as ‘Curves’, ‘Stripes and Diagonals’ and ‘Black and White’. Riley’s career is thus presented as a 70-year-long enquiry into the potential of basic shapes and colour combinations to magnify the physical sensation of looking.

These experiments lead to works which seem to undulate, shimmer and writhe on the walls. The eye experiences first and the brain is left constantly struggling to catch up. Some works blindside you, beckoning at you with their weird shape-shifting dance and before you know it, you’re hooked. Monochromatic paintings from the 1960s show how Riley first executed these visual acrobatics by focusing purely on form, arranging triangles, circles, and squares into rhythmic compositions. In these early paintings, one can see the impact that art historical references, and in particular, Impressionism had on Riley. The polka-dots of works such as Pause (1964), recalls one of the artist's major influences, Georges Seurat, whose use of dots to create currents of energy and light Riley greatly admired and assiduously studied. 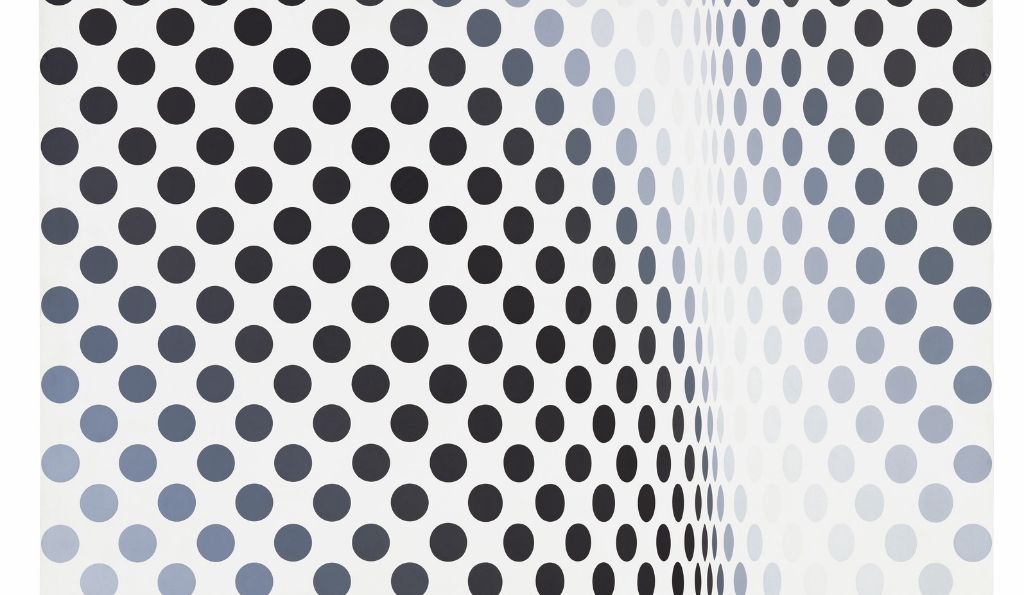 In 1967, Riley turned her creative efforts towards exploring the ‘instability of colour' to create optical drama. Many of the artist's stripe paintings have been gathered together to turn large swathes of gallery wall into a stage for warring hues. Bright colours in works such as Paean (1973) are cleverly arranged so that they compete with one another, making it futile to focus on just one.

The tendency to dwell on the retinal appeal of Riley’s works often overshadows her astonishing ability to generate meaning through abstraction and draw on weighty themes such as history and nature. After visiting Egypt in 1981, Riley began to create stripe works using what she called an ‘Egyptian Palette’. Royal purples, rich ochres and heavy blacks in works such as Ra (1981) come together in a ‘life-giving arrangement of colours’ to create a visual link with the past. 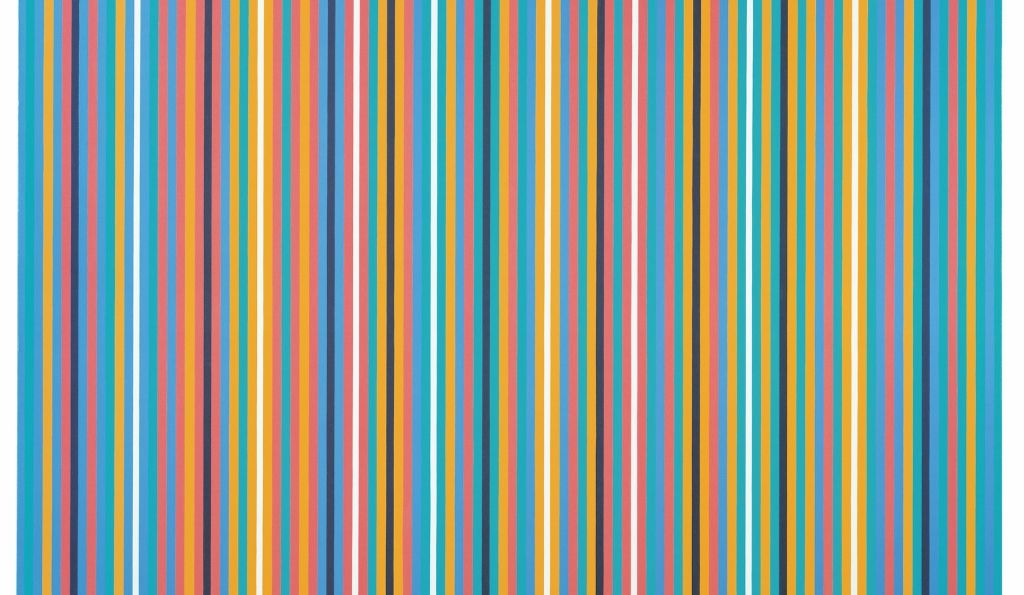 In such spectacular works, whose primary concern seem to be the unalloyed pleasure of looking, it is also easy to forget what consummate precision goes into creating their arresting effects. Op art is in itself inherently scientific as an art form which imports theories of perception to create visual trickery. Many of Riley’s sketches and studies have been gathered together to reveal just how much of her artistic process is made up of endlessly testing and retesting, highlighting the artist as a master engineer of illusion.

This interplay between the technical and the whimsical, the deliberate and the spontaneous, is characteristic of Riley's work. It is through this balance that she continues to generate surprise, a feeling which the exhibition succeeds in emulating in its free-flowing curation. You feel your way through the exhibition, not via any prescriptive way-finding, but through the gravitational pull of works. Every visitor's experience is different, just as it is for each person when they gaze upon a Riley.