Ivan Putrov’s Against the Stream Gala Night at the Coliseum, was a highly enjoyable show that transcended most of the limitations of the format

As Putrov, a former Principal Dancer with Britain’s Royal Ballet, now part-time dancer, part-time entrepreneur, told Culture Whisper, his aim was to create a varied show that was nevertheless unified by a clear theme.

Putrov’s Against The Stream was built around choreographers who broke the barriers and conventions of their time, and in so doing gave dance a new life. To embody their work, Putrov assembled an outstanding array of dancers from both sides of the Atlantic.

The concept came strikingly alive in the the middle of the first half, with the intelligent juxtaposition of two works by Jerome Robbins. Best know to general audiences for West Side Story, Robbins was an immensely versatile choreographer, who brought jazz and Broadway into ballet and vice-versa.

First we had Suite of Dances, where Robbins brought together on the same stage a cellist playing Bach and a male dancer, in this case the tremendously exciting Joaquin de Luz, lately of New York City Ballet. Small and slight but perfectly proportioned, dressed in loose crimson top and pants, de Luz executed Robbins’ combination of balletic steps and Broadway swing with engaging clarity.

One moment he was skipping around the streets of New York of a careless Sunday morning, the next he was creating the perfect arabesque line with an arm reaching out and upwards, the other aligned behind, always attentive to the dialogue between music and dance.

This was followed by Robbins’s purest neo-classical In G pas, to music by Ravel, danced in simple white by Maria Kowroski and Tyler Angle, both of New York City Ballet. Kowroski is the archetypal Balanchine dancer: tall, long-limbed, poised; and, as a veteran of NYCB, an assured interpreter of the company’s core repertoire.

Kowroski returned in the second half, this time partnered by Marcelo Gomes, in the glittering, regal Diamonds pas de deux from Balanchine’s magisterial Jewels, to music by Tchaikovsky. Balanchine, was, of course, one of the great innovators, the Russian whose contribution to the development of an American style of ballet cannot be overstated.

Ivan Putrov showed his mettle with an elegant interpretation of Ashton’s solo work Dance of the Blessed Spirits. 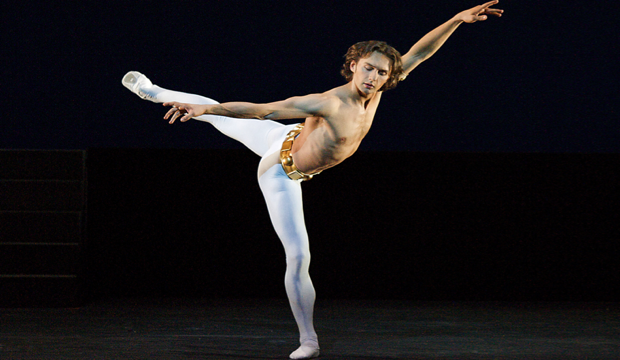 Ivan Putrov, Dance of the blessed spirits, in Against the Stream, photo Andrej Uspenski
With his classicism and musicality, Ashton is credited with having created a specifically English style of ballet, thus more than justifying his inclusion in this programme. A second Ashton piece was the Awakening pas de deux from Sleeping Beauty, danced with the conviction of newly-found young lovers by the Royal Ballet’s Matthew Ball and Mayara Magri.

There were virtuoso displays, too, mostly care of Dimitry Zagrebin, a Principal of Royal Swedish Ballet and the vibrant English National Ballet soloist, Katja Khaniukova in Vasiliy Vainonen’s rarely seen 1932 Flames of Paris, and Agrippina Vaganova’s ebullient 1935 Diana and Acteon Grand Pas, where they were joined by a corps of students from ENB School.

There was pure Broadway, in Twyla Tharp’s Sinatra Suite, performed to a quartet of Sinatra hits by Marcelo Gomes, still a powerful stage presence, and Kate-Lynn Robichaux in black evening dress and stylised ballroom mode.

Kenneth MacMillan’s spikier, near-expressionist Images of Love, a pas de trois danced by Ball, Magri and Putrov, needed perhaps a little more context to make its point; but on the whole Against The Stream was an intelligent and satisfying programme, danced by some of the best performers around.