Matthew Bourne's legendary Swan Lake comes to a screen near you, following a triumphant sell-out run at Sadler's

When it premiered in 1995 Matthew Bourne’s Swan Lake proved controversial. It wasn’t so much its irreverent portrayal of a snobby and loveless court, though that was part of its iconoclastic approach. It was Bourne’s decision to turn the diaphanous, uber-feminine swans of the much loved classic into feral male birds, and the homoerotic overtones of the Prince’s yearning for the lead Swan that scandalised.

At the same time Matthew Bourne’s Swan Lake attracted an enthusiastic fan base which, in the years that followed, grew exponentially and turned it into a major hit on mainstream stages worldwide.

Now Matthew Bourne’s Swan Lake is back, danced by his New Adventures company, newly lit by Paul Constable, with Les Brotherston’s superb designs updated; and it’s as fresh and powerful as ever – a worthy festive offering by Sadler’s Wells. 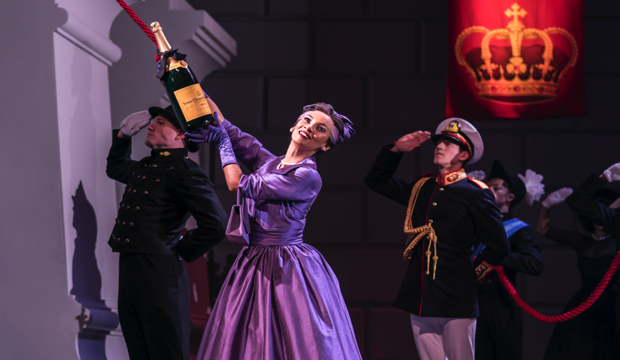 Nicole Kabera as The Queen in Matthew Bourne's Swan Lake, photo Johan Persson
The plot loosely follows the original: a misfit prince, ill at ease in a court riddled with stifling protocol and short on love, finds himself when he encounters a mysterious swan. His delusion causes his downfall, but there is redemption of sorts at the end.

Bourne’s Swan Lake is particularly strong in Acts II and IV dominated by the swans. This time led by the mesmerising Royal Ballet Principal Matthew Ball (on leave from his home company), the hissing swans are more feral, very male, very strong, with more than a hint of menace.

As they take to the stage in groups of three or four, leaning forward at the waist, their arms simulating powerful wings, there is nothing light and gauzy about them. Their stag jumps are earthy, their recurring head rolls imitate the reach of the birds’ long necks, their legs are prone to the jerky kicks of wary wild animals.

For a long run such as this, there are a number of casts. On press night Matthew Balls’ utterly compelling Swan was matched step for step, emotion for emotion by a remarkable Liam Mower as the Prince. 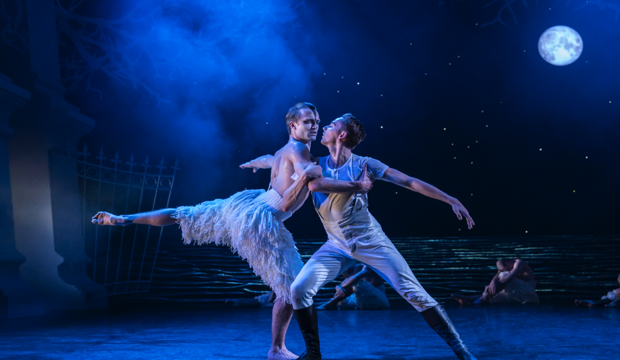 Matthew Ball as The Swan, Liam Mower as The Prince in Matthew Bourne's Swan Lake, photo Johan Persson
Balls and Mower’s central pas de deux in Act 2 is profoundly moving in the way the wildness of the bird is partly tamed and the despondency of the man gradually turns into uncontainable, glorious joy.

Both the looming menace of the swans and the attraction between man and swan come to full fruition in the ballet’s devastating finale.

Acts 1 and 3, set amid royals and courtiers, appear in this new version to have been put through a hyper-reality filter. As sublime and delicate a choreographer as he can be, Matthew Bourne can also do vulgarity like no other; and the vulgarity in the behaviour of the Prince’s entourage, and particularly his obnoxious putative girlfriend (Katrina Lyndon), is at times cringe-making. 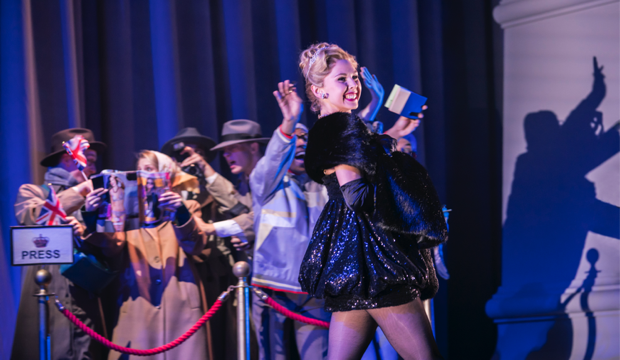 Seasoned Swan Lake viewers like to discuss whether the lead ballerina was better as the White Swan, Odette, or her evil Black Swan impersonator Odile. In Bourne’s Swan Lake, there is no Act 3 Black Swan, but rather The Stranger, a hustler type in black leather trousers, who crashes the Palace ball and makes out with all the women present, including the Queen (a young-looking Nicole Kabera), who’s been shown to be rather partial to pretty young men.

As Matthew Ball totally owns the role of The Swan, his Stranger is somewhat lacking; and although you can’t fault his dancing – Bourne’s choreography is demandingly physical – his swagger is not entirely convincing.

The confusion and despair of Liam Mower’s Prince, who mistakes The Stranger for The Swan, however, is strongly conveyed, so that his unravelling in the climax of Act 3 is powerful and shocking.

Matthew Bourne’s Swan Lake has earned its place as one of the seminal dance works of the past century, and its new incarnation clearly illustrates its timeless appeal. 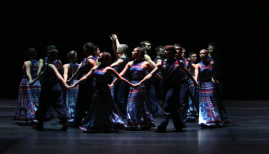