The White Crow, Ralph Fiennes' third film, tells the back story of the charismatic ballet dancer Rudolf Nureyev’s decision to defect from the Soviet Union in 1961

Rudolf Nureyev changed the face of ballet in the West, with his wild animal magnetism and a hard to define charisma that grabbed the audience the moment he stepped on stage.

Nothing like that had been seen on more sedate Western ballet stages before.

And yet, it could all have been lost to us, were it not for his impulsive defection at Paris Le Bourget airport on 16 June 1961, during a rare tour of the West by the Kirov (now Mariinsky) Ballet.

Ralph Fiennes’ film The White Crow focuses on Nureyev’s early life in the Soviet Union culminating in the events that led to his fateful jump to freedom.

As it opens, Fiennes himself, who plays Nureyev’s Leningrad (now St Petersburg) ballet teacher and mentor Alexander Pushkin, is being interrogated by the KGB in the aftermath of the dancer’s jump to freedom. Was Pushkin aware of Nureyev’s plans? ‘Nyet.’ (Much of the dialogue is in Russian, a language in which Fiennes is proficient.) Was this a political statement on the dancer’s part? ‘Nyet’. What was it then?

The White Crow looks for the answer to that question by moving between three different timelines: Nureyev’s birth on a train and his deprived childhood in Ufa, Central Russia; his ballet training in Leningrad and early days in the Kirov Ballet; and his time in Paris with the Kirov on tour. All three times are meticulously reconstructed, and all the settings and interactions feel truly authentic.

The film's title, The White Crow, comes from a Russian expression meaning an unusual individual, an outsider; and that is the Nureyev that Fiennes and his screenwriter David Hare go on to outline through their protagonist, the young and very impressive Ukrainian ballet dancer Oleg Ivenko.

As an intent little boy in his first folk dance class, Nureyev's innate talent impresses his teacher. As he gains a place in the prestigious Vaganova Ballet Academy, at a beginner’s late age of 17, he determines ‘to do the work of six years in three.’ And with the iron will and absolute dedication that would go on to define his career, he does.

Spikey and a born rebel, Rudolf Nureyev didn’t make friends easily, nor was he prepared unquestioningly to accept discipline; but he was lucky to land in the class of Alexander Pushkin, a remarkable teacher and a kind and patient man, who not only taught him but also welcomed him in his own home.

Timeline three shows us Paris through the eyes of the intellectually voracious Nureyev, with his eagerness to discover all the culture and nightlife the city had to offer; and to enjoy the forbidden freedom to socialise, to the despair of his KGB minders.

The friendships he struck in Paris with the dancer Pierre Lacotte (Raphaël Personnaz) and the socialite Claire Saint (Adèle Exarchopoulos) were to prove key to his decision to defect, when he was faced with the prospect of an early return to the Soviet Union as punishment for his escapades.

The whole Paris sequence is superb; and the extended face-off at Le Bourget airport carries almost intolerable suspense, of the kind that has you holding your breath, never mind that you know the outcome already.

Fiennes opts for an episodic structure that cuts back and forth between the three timelines. Rather like a developing jigsaw puzzle, the scenes gradually define a very rounded image of its central character; but the constant chopping and changing between very short scenes can be a little frustrating.

That said, The White Crow is a fitting portrait of a rebel who early on, and regardless of the strictures with which he grew up, determined dance was his life, and that ‘to dance I must be free.’ 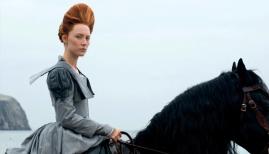 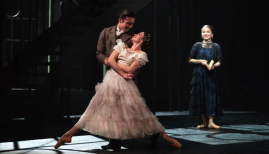