Director Simon Goodwin embraces the sensuous beauty of Shakespeare’s Roman romance with an elegant contemporary aesthetic and seriously impressive staging. While Ralph Fiennes and Sophie Okonedo bring immense talent, warmth and wit to the besotted General and his queen.

We meet the lovers in the languid leisure of Alexandria. Cleopatra’s kingdom is all teal tiles and golden light. She wafts around in flowy silk gowns (the costumes get better and better until a fabulous final frock coat with golden bees embroidered). Semi-retired Roman warrior Antony is close by the queen's side, swooning and dressed up like mid-life crisis personified in an open shirt, beaded necklaces and voluminous sarong/trousers. 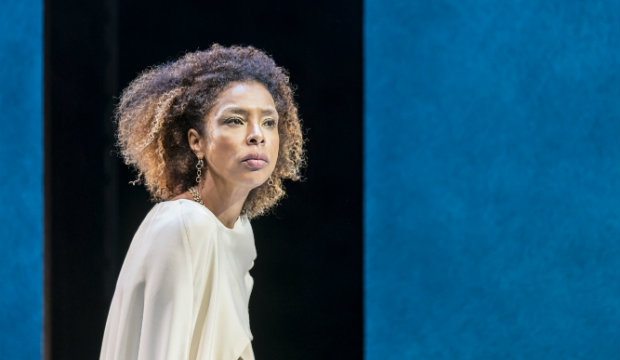 As news comes that Antony’s wife has died, leaving a perilous political situation back home, we see Fiennes switch back into battle mode. His whole posture changes when he dons a suit and doe eyes give way to clipped tones as he arranges to depart.

Okonedo is a delight as the petulant mistress, regaling her attendants with fickle attention-seeking flirtations. But, as much as she demurs and depends on her Antony’s devotion, Okenedo’s Cleopatra radiates poise and self-assurance.

After the opulence of Egypt, Rome is a cold, corporate contrast. In a marble boardroom, Julius Caesar and Marc Antony broker a tenuous peace based on Antony marrying Caesar’s sister.

It is Enobarbus (played by a droll Tim McMullan) who voices what is already inevitable: the marriage is doomed as no woman can compare to Cleopatra. McMullan savours the great ‘age cannot wither her’ speech, drawing out each word. 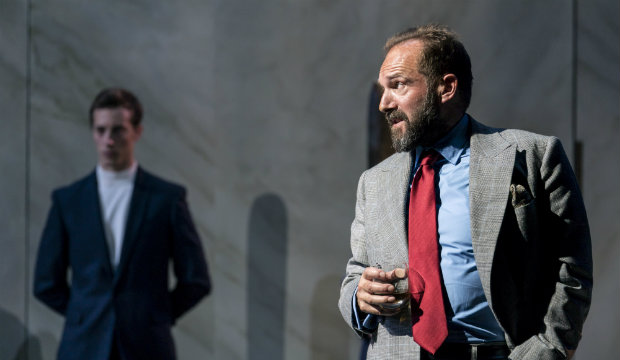 The romance, betrayal and battles that ensue are played out with a levity that makes the three and half hour stage time feel zippy. We particularly enjoyed the volatile Cleopatra venting all her frustrations on the messenger who reveals Antony has re-married.

The revolving set by Hildegard Bechtler is marvellously malleable, shifting from lascivious luxury to the disorientating destruction of war. No expenses are spared – from bombs exploding on stage to the jaw-dropping realism of Cleopatra’s snake bite suicide.

Often wow-factor design can feel like a crutch for a paltry production (most recently in the National's lacklustre Macbeth). But the glory of this show is in how the lustrous sets and gorgeous costumes work to intensity Shakespeare’s drama while making it feel fresh and especially watchable.

When We Have Sufficiently Tortured Each Other, National Theatre review
Sign up to CW’s newsletter
By entering my email I agree to the CultureWhisper Privacy Policy (we won`t share data & you can unsubscribe anytime).