A regal epic with a finely crafted narrative, Northern Ballet’s ambitious Victoria is an engrossing success

1 CW reader is interested
Northern Ballet, Victoria Review 4 Northern Ballet, Victoria Review Teresa Guerreiro
Back for their regular Spring run at Sadler’s Wells, Northern Ballet present another ambitious work, this time chronicling the life of Queen Victoria. Following on from the success of her Jane Eyre, choreographer Cathy Marston undertakes the sizeable task of condensing the Royal’s intriguing story into a two-hour capsule of tragedy, heartache, love and lust.

The programme notes for Victoria run over two A4 pages – there’s no denying there’s a lot to get through – but together Marston and this company of fine dance storytellers engross us in these fascinating segments of the protagonist’s life. Her extensive volumes of hand-written diaries provide the structure which darts between past and present.

Just to keep us on our toes, Marston begins with an examination of Victoria’s later years, told from the viewpoint of Beatrice (Pippa Moore), the monarch’s initially resentful youngest child. Hardened by her long-standing widow status, Abigail Prudames’ weary but regal Victoria is still bound by her courtly duties, though she has grown tired of them. Living in seclusion, her eye is caught by the brooding masculinity of the servant, John Brown (Mindi Kulashe), and the pair embark on a secret relationship that fizzes passionately.

Beatrice also acts as a spectator to her own life, with her younger self played in spritely fashion by Miku Akuta, who hops and jumps excitedly, in awe of her majestic mother. Later she falls for Liko (joyfully interpreted by Sean Bates) and the pair become engaged, much to possessive Victoria’s rage.

Beatrice and Liko share a light and untroubled pas de deux full of youthful exuberance, leaping and running freely as Moore’s older Beatrice joins in as a third wheel, unseen by the her younger self and Liko.

Further enhanced by Philip Feeney’s cinematic score, the climactic conclusion of Act I depicts Liko’s death and Victoria encasing her daughter in a black dress signifying she must now live her life as a widow like her. More pages are hastily torn from the diaries as Beatrice realises her life is echoing her mother’s, wrapping up a cleverly crafted first act.

Although Act I does a lot of the narrative heavy lifting, satisfying dance content lacks slightly. Act II shifts the focus to Victoria’s relationship with Joseph Taylor’s Albert and the audience are finally treated to some amorous pas de deux. Prudames morphs into Victoria’s younger self, and although still commanding, her girlish energy softens the stern character seen earlier on.

Taylor and Prudames’ first dance is tender, if a little reserved, as Marston’s choreography flows easily from one movement to the next and the pair skim gently across the floor. The wedding night pas de deux is a far more heated and sensuous affair complete with a crushed velvet chaise longue.

Marston wisely includes the occasional dash of humour between lust and jealousy. Beatrice’s prudish censoring of her mother’s diaries, as she rips out pages detailing her candid feelings for Albert, is a fine example of this. There’s a recurring motif of the male characters planting a kiss on Victoria’s feet as a sign of respect, something the Queen also appears to delight in.

There is quality not only in the nuanced choreography but in the stately and elegant costuming from Steffen Aarfing, who also creates a vivid sense of claustrophobia with the imposing walls of bookcases which frame the set. Nor does Marston waste a second of opportunity to neatly execute the narrative. The functional ensembles, made up of either Archivists for Victoria’s diaries or royal party guests, are well drilled in clear formations but they are never just decorative; and even with so many dancers on stage Marston never allows the storytelling to lose focus.

Northern Ballet should be applauded for consistently turning out new and complex narrative work that is unique, engaging and captivating, both for dance fans and a general audience seeking an alternative interpretation. 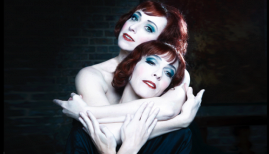