The Cuban ballet superstar Carlos Acosta gets the biopic treatment in Yuli, the uneven but often gripping tale of a rebel child forced to accept his destiny

Carlos Acosta is one of the most compelling ballet dancers in the world, and holds a special place in the hearts of British balletomanes by virtue of his 17 glorious years in The Royal Ballet.

Yet, interestingly, the central character in Yuli, the one who haunts you long after the film has finished, is not Carlos Acosta himself, but rather his indomitable father Pedro, in a remarkable performance by the Cuban actor Santiago Alfonso.

Pedro Acosta is a poor black lorry driver in Havana. The son of plantation slaves, he is aware of the apparent predestination of his condition; as he tells young Carlos, ‘you carry 350 years of slavery in your blood.’

A follower of the African-Cuban religion of Santeria, Pedro nicknamed his baby son Yuli, after the son of the all powerful god Ogun. He is determined that Yuli will escape his condition and knows he’ll do so by virtue of his innate talent. ‘You’ll be the best dancer in the world – that’s that.’

Pre-teen Carlos, in an astonishing performance by the debutant Edilson Manuel Olvera Núñez, will have none of it. A born rebel, borderline delinquent, he’s happiest roaming the streets with gangs of other children and perfecting his already impressive breakdancing.

Pedro drags him kicking and screaming into Havana’s National Ballet School. From then on, the story is one of the titanic struggle between these two characters: the adamantine Pedro, and his equally stubborn son, who resists his destiny well into his teenage years.

Director Iciar Bollain and her screenwriter husband Paul Laverty (I, Daniel, Land and Freedom) chose to tell the story through the eyes of Carlos Acosta himself, based on his autobiography No Way Home. The real life Carlos is very much present in the film.

Yuli cuts between the straightforward reconstruction of Carlos Acosta's life and long sequences of his distinctly dodgy autobiographical ballet in progress, one which you would probably choose to give a miss to. As a filmic device this doesn't really work.

There are lingering close ups of Carlos in the rehearsal room lost in his own memories, a far away look in his eyes; or leafing through the the meticulous scrapbook Pedro kept as the young dancer's talent gained international recognition, finally achieving with the Royal Ballet what Pedro considered the highest accolade – ‘the first ever black Romeo, my son Yuli.’

Havana’s breathtaking, if rather derelict, beauty is well-served by panoramic shots; its sunny days a contrast with the grey and rainy London Carlos found it so difficult to adapt to. The reconstruction of life in Communist Cuba in the 1980s and 90s skilfully documents its mixture of privation and vibrancy.

Acosta’s is an inspirational story and the film does not stint on emotion; but by the end, beyond the fact that Carlos Acosta is an extraordinary dancer with a magnetic stage presence, we learn little about the adult man (acted by the dancer Keyvin Martinez). His character in this film is like an outline drawing somebody forgot to colour in.

By contrast, Acosta Sr is a fully formed, larger than life, hugely forceful character, one who, for all his faults, really draws the viewers' interest – sympathy even.

This imbalance is a weakness in a film where Carlos should be the central character. That said, Yuli is a profoundly human, life-affirming film, told with eye-filling colour and vibrant performances – definitely a crowd pleaser.

There will be a special screening of Yuli followed by a Q&A with Carlos Acosta at Sadler's Wells on Monday, 6 May at 18:00
Click here to buy tickets 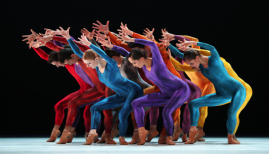