Based on the novel by Patrick DeWitt, Jacques Audiard’s American debut The Sisters Brothers follows a pair of sibling assassins (John C Reilly and Joaquin Phoenix) in 1850s Oregon. They’re tasked with torturing Hermann Kermit Warm (Riz Ahmed), a chemist who’s invented a formula to reveal gold in the rivers.

The film opens with well-shot violence as Eli Sisters (Reilly) and Charlie Sisters (Phoenix) shoot up a farm in the dark. They wield a conflicting balance: Eli’s the nice one and Charlie’s crazy – and their skills as killers are often reliant on this Good Cop/Bad Cop dynamic. With Audiard’s stretched pace and cinematographer Benoît Debie’s knack for capturing the vastness of the West, the characters are softly intriguing at first. 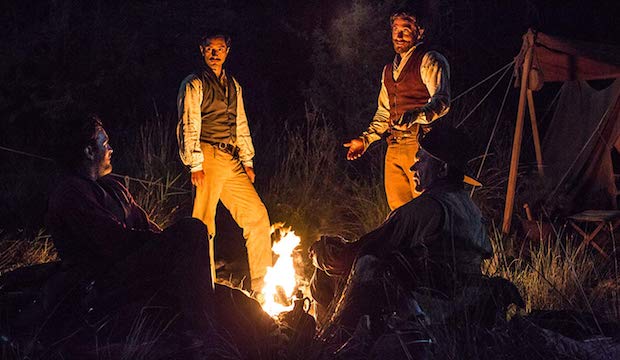 Joaquin Phoenix, Riz Ahmed, Jake Gyllenhaal, and John C Reilly do well to connect the characters in The Sisters Brothers

But it’s not long before we grow bored of their company. The conflict between them is bare at the start, turning the first 20 minutes into an effort. Even their most heated argument, leading to Eli almost leaving, is easily resolved without much explanation.

It’s clear that Audiard wanted to make a character-driven, vaguely existential Western, in a similar tone to the Coen Brothers – but he possesses none of their bite. Audiard abandons so many opportunities to draw out the humour or extend the darkness, never being entirely sure about what tone to go for. Is it a brutal period piece? Is it a dark buddy comedy? Is it an existential road movie?

Reilly and Phoenix, as well as Jake Gyllenhaal and Riz Ahmed, do well to connect the characters – but The Sisters Brothers is a mostly dull Western, a botched experiment without much to be moved by or excited about.