Captain Marvel, Brie Larson's entry into the Marvel Cinematic Universe, is the first female-led superhero film of the franchise

It’s one thing for a tide to turn, but a whole other matter to understand where the wind is coming from. Captain Marvel is the first female-led superhero film in the Marvel Cinematic Universe – the eponymous hero is supposed to be the person to change the game, the one who will fight higher, further, faster.

And she does – at least, she’s trying to remember how she still can. Carol Danvers (with a wincingly on-the-nose code name) is a pilot, a fighter on a planet called Kree, an unapologetic figure trying to, well, figure out who she is. The intrigue around her identity comes from the fact that she trains up as the mentee of shifty alien commander Yonn-Rogg (an enigmatic and somewhat exotic Jude Law) but can’t remember how she got there.

The origin story of one of the franchise’s most curious and compelling heroes arrives at a crossroads. The end of Avengers: Infinity War left a devastating cliffhanger, set to be resolved in Endgame this April, and suggested that the introduction of Captain Marvel onscreen would help with that.

So Brie Larson suits up as Danvers, saying the right things and fighting all the tired clichés as to what role a woman can play in a world she’s being blindsided by. But Captain Marvel tells more than it shows, as villains arbitrarily decide that emotions are bad and action is good – but then this is never explored or disproven either. 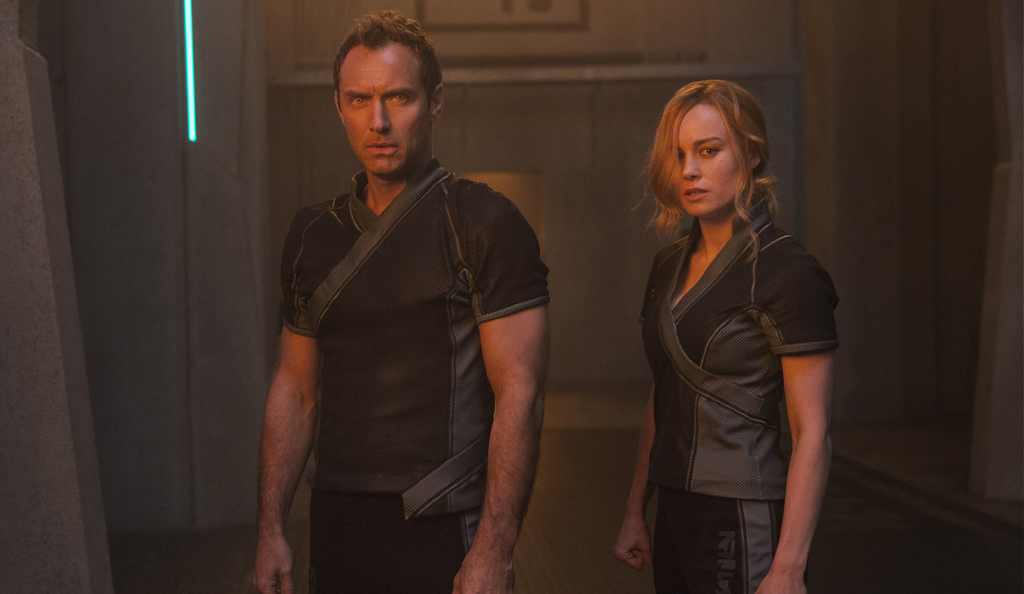 Jude Law and Brie Larson as Krees in Captain Marvel

The film is defined by quickfire blasts, fights, quips and flights, without pausing to tend to the very reason Danvers could have what this franchise has been missing – she's a hero who ends the right wars, but seldom stands as a nuanced, unpredictable person who could set an example for a wide-eyed audience on Earth just looking for an everyday role model. The first woman to show signs of heroism is given little more than a proton blast to develop her personality.

Directors Ryan Fleck and Anna Boden borrow world-bending aesthetics from Guardians of the Galaxy and Black Panther, channelling futurism and nostalgia at the same time. This injects a sense of fun, but it's hardly one we haven’t seen before. Keeping an explosive pace at all times maintains showy excitement, but it also lowers the stakes that could let the woman come to life with more than what other people tell her.

It’s frustrating that Captain Marvel presents a lot of ticked boxes without actually shaping them, nurturing them, diving into them or pointing at much more than the labels they’re plastered with. But these labels seem, somehow, brand new to the Marvel universe – maybe in what’s always been a boy’s club, it’s a good enough start to have moved in some new furniture.