The fight for gender equality is by no means over, but to witness a film about a woman, still alive and very much real, who changed the game for women's rights is incredibly galvanising. On the Basis of Sex tells the story of Ruth Bader Ginsburg, Associate Justice of the US Supreme Court – known around the world as the 'notorious RBG'.

When she was appointed by President Bill Clinton in 1993, Ginsburg was the second woman to ever be nominated. Before and since then, she's never stopped fighting to prove that discrimination on the basis of gender is wrong.

The film chronicles Ginsburg's life from her Harvard days up to the case that justifiably launched her into the stratosphere, as she challenged the law assuming a caregiver has to be a woman, and set the wheels in motion for equality as a movement, not just a moment.

Felicity Jones plays Ginsburg with sturdy determination, as a woman who has always fought in a man's world. It's not a fight that shouts, as the actor shows ambition that never feels forced. People who know Ginsburg always refer to her quiet nature, focused on her trailblazing work without vehemently pointing at it.

Even when a Harvard professor provokes her, and the eight other women in her class, by asking 'Why are you here, occupying the place that could have gone to a man?', Jones keeps her cool and even incorporates playful humour that anchors RGB's presence as admirable – fiery, but never too theatrical. 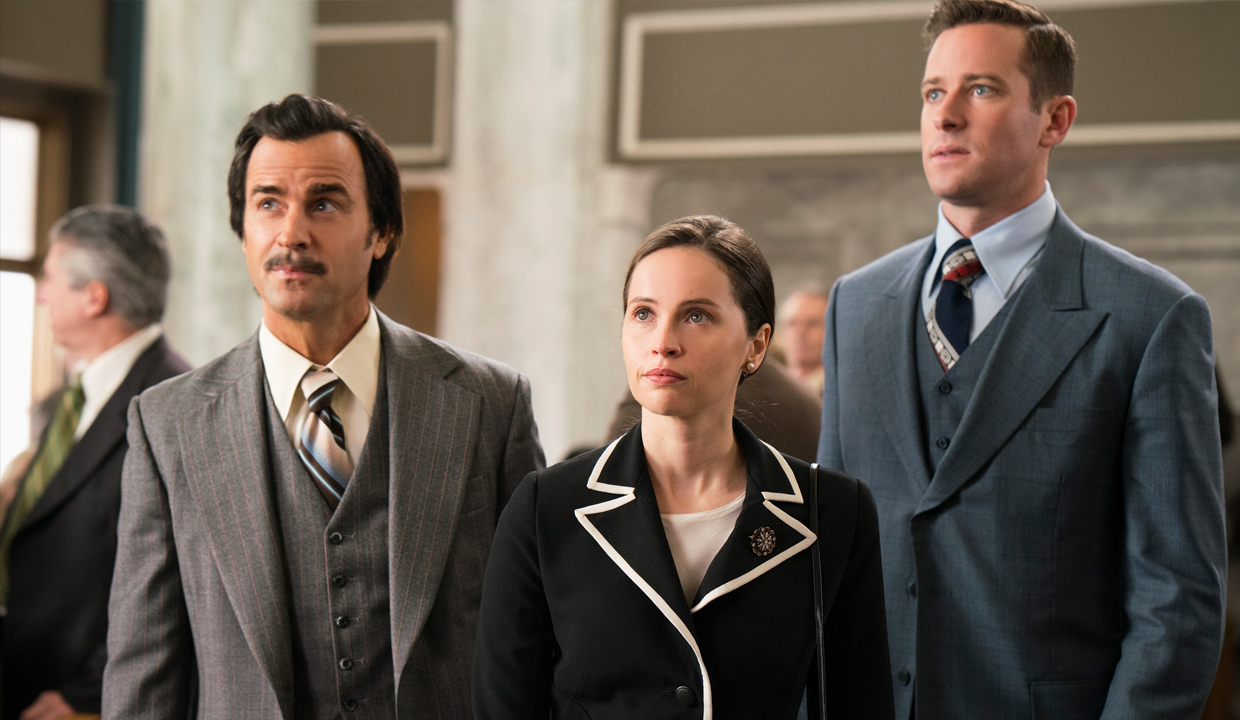 Justin Theroux, Felicity Jones and Armie Hammer in On the Basis of Sex

As well as focusing on Ginsburg's magnanimous impact over the course of her career, director Mimi Leder takes care to explore her subject's whole identity by carefully retelling the loving marriage between Ruth and her husband of over 60 years, Marty.

Armie Hammer rises to the task of playing the man who supported Ruth from the beginning until his end, as a particularly progressive and endlessly supportive husband, which was somewhat unheard of in the era during which they both climbed the ranks of their profession.

While the film might occasionally lack in subtlety, the vital takeaways speak volumes. On the Basis of Sex might seem like a reaction to the #MeToo movement, but the Weinstein allegations broke while the shoot was already in progress. This proves Ginsburg's urgent influence, that was ahead of her time in the 1950s and 1960s, is no less relevant today.

Breaking an 18-year filmmaking hiatus for Leder, who struggled to make a film after the commercial failure of her previous feature, Ginsburg's fight also mirrors the difficulty female filmmakers have faced in being taken seriously in the industry. As accompanying viewing, a documentary spanning RBG's life (aptly titled RBG), told through first-person interviews and accounts from people who know and admire her, is currently nominated for an Oscar.

There were only nine women in Ginsburg's year at Harvard. When asked how many women should be on the Supreme Court, of course, she replied 'nine' – indicating that all of the possible Justice positions should be filled by female candidates. RBG's success is no fluke, and her influence cannot be underestimated. On the Basis of Sex gives a platform to her story, and hits all the right notes to be heard by both men and women everywhere.

Based on a true story: movies and biopics coming soon
Sign up to CW’s newsletter
By entering my email I agree to the CultureWhisper Privacy Policy (we won`t share data & you can unsubscribe anytime).
1