Noah Hawley directs Natalie Portman in Lucy in the Sky: a loosely true story focusing on the erratic unravelling of one woman feeling too much to stay grounded

It’s not uncommon practice for a woman to be dismissed for being too emotional – and contemporary filmmakers aren’t afraid of condemning this habit with microscopic attention. In Noah Hawley’s unhinged space drama Lucy in the Sky, Natalie Portman takes hold of a character with as much desire and confidence as any astronaut seen on screen before – but Lucy Cola is one with too many anxieties on the ground to hold on to the serenity her extraterrestrial adventures gave her.

In Damien Chazelle’s First Man, Ryan Gosling took on the role of Neil Armstrong and played the first man to walk on the moon with impenetrable stoicism, showing a side of trauma and yearning that relied on the impossibility of communication when one person has seen so much, and the rest of the world can’t even begin to imagine it.

Lucy in the Sky begins in a similar way, opening with a wide-open frame of Portman, starstruck by the enormity of an endless universe. The rest of the film deals with what happens once you’ve pierced the limit of the sky, yet still have to find tangible meaning in a world that will always be so much smaller.

Hawley deals in astonishing ambition, often preferring existential grandeur over logical storytelling. At first, he waits and cares for Lucy, tiptoeing around her fragile return to suburban life, but this quickly dissolves in favour of a picture that creates space for Lucy’s fears and frustrations to run rampant – it becomes a picture that is even more unsettled and illogical than its subject. 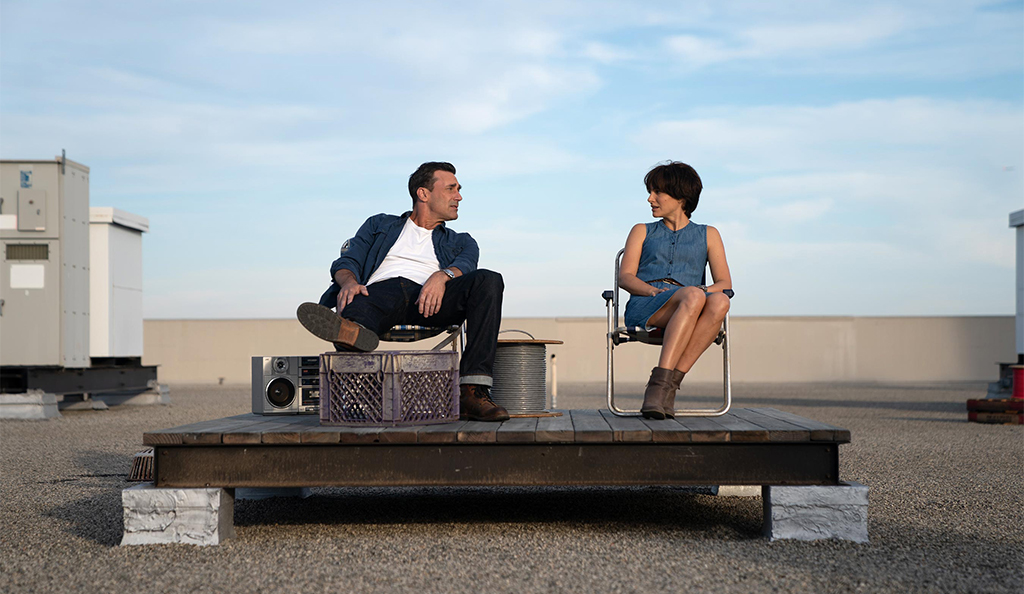 Jon Hamm and Natalie Portman in Lucy in the Sky

The film is based on the true story of Lisa Nowak, an astronaut who made considerably more headlines for her personal and emotional exploits than her professional achievements. It’s this former curiosity that Hawley follows and plays out – focusing heavily on an extramarital affair that so quickly spirals and blows up everyone within miles of it.

It seems that Hawley’s biggest priority is to capture a feeling in a bottle, and shake it up with such vigour that the contained events can’t help but erupt messily. He relishes Lucy’s trauma, prods every potential insecurity until Portman detonates. She makes a fool of herself, but as the frame physically shifts around her, becoming taller and wider in real time, it’s often open to question who’s really deserving of mockery here.

Portman does fine work as the blindly embittered and impassioned Lucy, throwing all caution away in the name of one major feeling. She finds this feeling with Mark Goodwin (Jon Hamm), a colleague who understands and unlocks her most passionate and dangerous appetites.

But it’s worth wondering when, if ever, a feeling can be enough to survive on – it’s rare to see such immense impulse given the time and space of Lucy in the Sky, but once the thrill of the forbidden fruit has worn off, what’s left is a peculiar hybrid of a movie: part scatty comedy, part existential opera, part crime thriller and part psychological diagnosis.

A woman’s sadness is so often romanticised, compartmentalised or simply dismissed – but there’s nothing sterile or placid about the pulse of Lucy in the Sky. The film zooms into this stubborn unravelling with unparalleled recklessness. It screeches into the abyss, blissfully oblivious of whether anyone is actually listening.